Michelle Benson savoured her first elite classic victory when she came up trumps in the 116km Ride for Sight in Boksburg yesterday.

Benson forms part of Cycle Nation, who have made waves in local women’s cycling this season.

The team had a strong presence in the Gauteng and national road champs in recent weeks and backed that up with a victory in yesterday’s contest.

“This was my first elite win so it was massive for me. I still can’t believe it,” a delighted Benson told In the Bunch today. 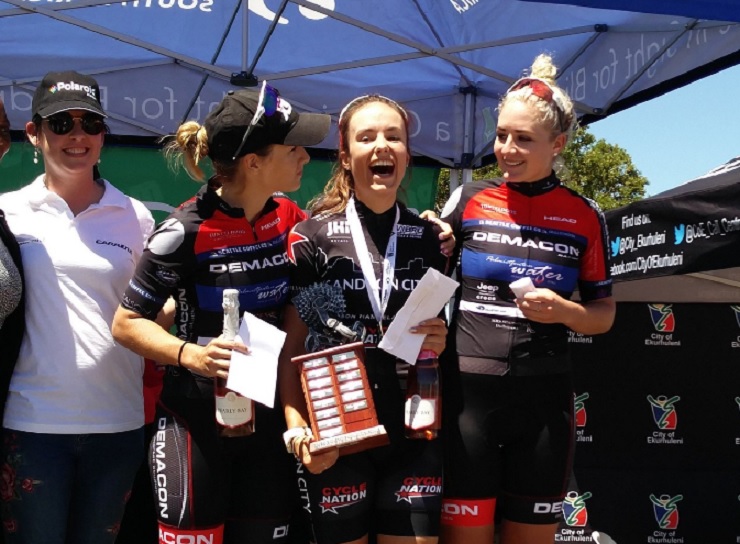 The 23-year-old Benson was teamed up with Joanna van de Winkel, Juanita Venter, Cashandra Slingerland and Zanri Rossouw for the race.

Van de Winkel said beforehand that they wanted to keep their momentum going and needed to split the bunch up to avoid a bunch sprint finish.

That plan did not really materialise, but Benson managed to defy the odds and win in the final sprint anyway against some powerful, punchy riders.

“We didn’t come into the race with me being the designated sprinter. I actually planned to lead Joanna out if it came down to a sprint,” Benson said.

“I knew I wanted to be [on about] the third wheel through the [final] corners to try and lead her out.

“But [Demacon MaxWax’s] Heidi Dalton led out Kim le Court so fast that we actually got a small gap from the rest of the bunch.

“In the sprint I then just tried to follow Kim, who is an amazing sprinter.”

That tactic worked out as she edged Le Court by milliseconds in the end, with Dalton claiming a close third.

Benson admitted that the team lacked confidence heading into the race, with them not having a specialist sprinter.

“We were unsure how a sprint finish would pan out. At the end we couldn’t shake the fast sprinters, but thankfully things worked out well for us.

“I think I surprised not only myself and my team but a few others as well.”

She devoted the victory to her team, though. “This was definitely a team win. Our whole team worked together and for each other.”

“The bunch was big and that’s awesome to see,” she said, identifying Cherise Willeit, Liezel Jordaan, Maroesjka Matthee and the Demacon MaxWax group as having been “strong competition”.

Explaining her team’s success so far, she said they do not try to put too much pressure on themselves in race situations.

“We started off well and have kind of been on a roll since,” she said. “We rather want to focus on having fun.”

She and the team will next focus on the Berge & Dale in Krugersdorp this weekend.