Nolan Hoffman savoured his first victory as part of his new self-managed team, DNS Sports, at the 106km Herald Cycle Tour today. It was also his seventh victory overall at the Port Elizabeth event.

Hoffman runs the team alongside long-time friends and teammates David Maree and Steven van Heerden, who also both rode in today’s race.

The trio are currently on a quest to secure a title sponsor for their set-up, which is still in its formative stage. 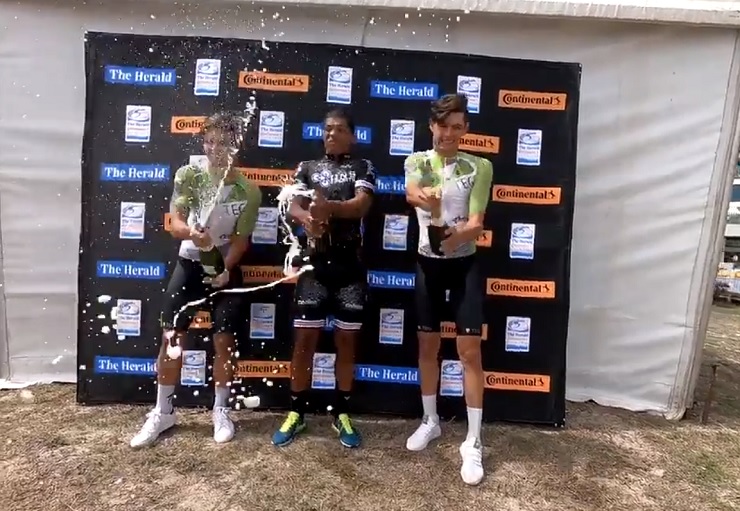 They debuted in their team colours at the Ride for Sight last weekend, but the race never went according to plan as Hoffman suffered a vital mechanical which put paid to his chances.

In the wake of that and given the need to boost the team’s profile, winning the Herald today was particularly special for Hoffman.

“This is officially our first win for the team – and the first of many, I hope,” Hoffman told In the Bunch today.

“It was a dream start for the three of us and I’m really happy about that.”

Hoffman completed the race in 2:32:14, beating the TEG Procycling pair of Ryan Harris and Gustav Basson in a sprint finish.

The 33-year-old was made to sweat after his victory, however. The announcement of the official result was delayed while the commissaires debated whether or not Hoffman had impeded Harris in the sprint.

“The wind was coming from left to right so I was riding along the left-hand barrier and he tried to pass me on the left,” Hoffman explained.

“He shouldn’t [have tried] passing me on the left. That’s dangerous, especially if the wind is coming from the left. He should’ve tried to pass me on my right.

“He made a mistake by doing that. It would’ve been a different story if he was next to me, but I was still in front of him so I had the right of way.

“It’s not like I made a sudden movement from right to left. It was progressive, and it was still with more than 150m to go so there was still time for him to go to the right.”

The debate was whether Hoffman boxed Harris in or not. Eventually the commissaries ruled that Hoffman had not been at fault in terms of the lines he rode and therefore the result stood.

The Franschhoek local said there was some “argy-bargy” in the final 500m as the riders frantically attempted to take up strategic positions for the sprint.

“TEG led the sprint out and we were in the right-hand gutter so the only way to pass them was on the left side, which meant I had to sprint into the wind.

“But I went quite early and Ryan tried to pass me on the left. But I think I had enough to hold him off in the end.”

Given that they were at a numerical disadvantage against the TEG riders, Hoffman was pleased their tactics played out so well on the day.

“We handled ourselves quite well in the race,” he said. “We never missed any big breakaways.

“Considering the make-up of the [breakaway] group, we had confidence in Steven being up there, while David and I could police from behind. It was a perfect scenario for us.”

He added that he doubted his form heading into the race, saying he was “a bit nervous” at the outset.

“But I think today showed that the legs are coming along quite well.”

He and the team will next focus on the Tour of Good Hope in just over a week’s time, before Hoffman seeks to defend his Cape Town Cycle Tour title.