Belgian Frans Claes says he and HB Kruger are looking to maximise their efforts at the Cape Epic, which starts with a 21km prologue in Cape Town on Sunday.

The in-form duo already have one victory under the belt, having won the PE Plett together in a competitive field a couple of months ago.

“The goal is to do the best we can while getting the maximum out of ourselves,” Claes told In the Bunch today.

“I’m very confident that it can work out with HB. In PE Plett we showed it, even without having known each other.” 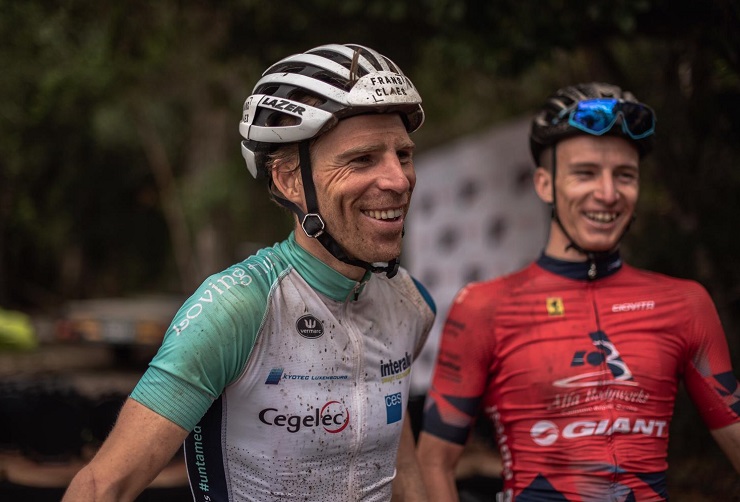 Belgian Frans Claes (left) says he and HB Kruger (right) are looking to maximise their efforts at the Cape Epic, which starts this weekend. Photo: Rory Scheffer

Since that triumph Claes said the two of them, riding as Alfa Bodyworks-Square Group, had trained regularly together while getting to know each other off the bike as well.

Despite not being able to target the red African jersey, Claes said they still had high hopes for the Epic.

“We want at least a top 10,” Claes said. “You’re aware that if you’re a strong team and you work really well together anything can happen.

“We will try to do our absolute best.”

Their strengths complemented each other well, Claes explained, especially since Kruger has some road form racing for Alfa Bodyworks-Giant this season.

“We’re both more the marathon-type of riders. But HB probably has more speed from riding on the road, while I’m more the climber type.

The field is without doubt the most competitive in the world of mountain-biking.

But the first to spring to mind when asked who he considered the favourites were SCOTT-SRAM’s Nino Schurter and Lars Forster and Investec-songo-Specialized’s Sam Gaze and Jaroslav Kulhavy.

Kulhavy is the reigning champ, having won the eight-day race with Howard Grotts last year.

“Nino has won it before [in 2017] and Jaroslav won it last year. It is a little bit of a question mark whether Sam can survive eight days, but he’s shown in one-day races that he’s world-class.”

He added that the South African pair of Alan Hatherly and Matt Beers, who will both ride under the Specialized Foundation-NAD banner as a back-up team for Kulhavy and Gaze, could be the dark horses.

“They could be a team to watch. They know each other very well. They showed in the last few weeks that they are in great shape.

“If Jaroslav and Sam get a problem then they’ll be the first team to step in to go for the title.”

He noted that while they would be targeting at least a top-10 result they would be hoping for a top-five as a goal, as well as a “few podium finishes”.

“We will try to ride a consistent race and if we can see an opportunity for a stage victory then we’ll put all our cards on the table and go for it.

“My shape is really good at the moment, better than what it was last year and the year before. We haven’t had any illnesses or crashes leading up to this, so we’re confident.”