Gustav Basson showed his sprinting prowess to win the second stage of the Takealot Tour of Good Hope road cycle race in the Cape Winelands today.

After rain on Monday, cyclists experienced much better weather on the 114km second stage which ended in a dash for the line.

With TEG Procycling teammate Jason Oosthuizen playing an important part, Basson was set up perfectly for the final sprint and crossed the line in 2:39:03. 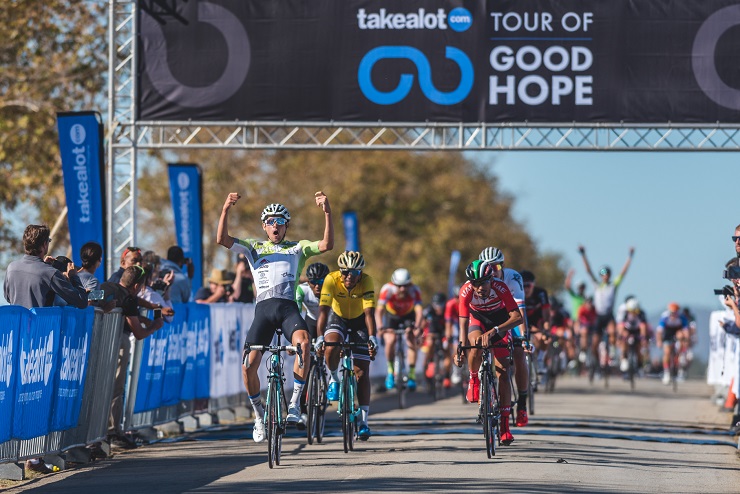 Gustav Basson celebrates his win on the second stage of 114km in the Takealot Tour of Good Hope road cycle race near Paarl in the Cape Winelands today. Photo: Henk Neuhoff Photography

Hoffman leads the general classification, with Alhammadi second and Mayer third. But at this stage the leading group all have the same times and they will be looking to tomorrow’s team time-trial to break the deadlock.

After an early three-man breakaway just after the 20km mark, Basson said all the teams worked to control the race.

“Each one of the teams who didn’t have anyone in the breakaway put someone in the front and it was just a matter of controlling it for most of the day,” he said.

“When the gap grew to three minutes with about 30km to go we decided to ride to close it because we knew it would come down to another sprint finish.”

After catching the breakaway with 5km to go, Basson said Oosthuizen had him perfectly placed going into the final sprint. 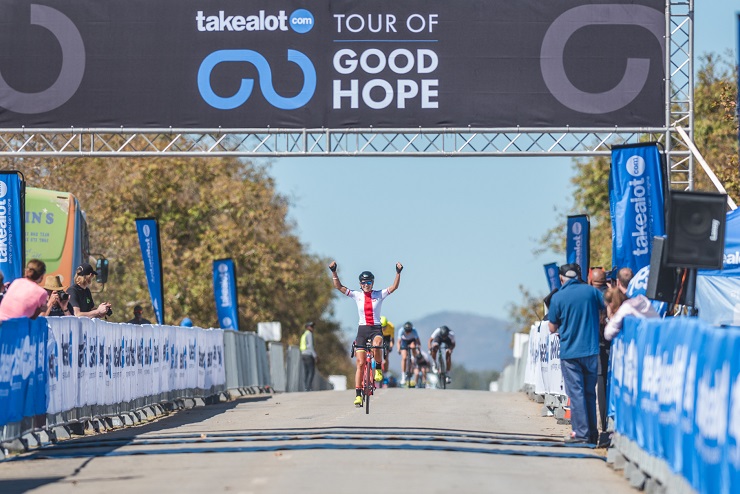 Polish rider Maja Wloszczowska celebrates her win on the second stage of 114km in the women’s category of the Takealot Tour of Good Hope road cycle race near Paarl in the Cape Winelands today. Photo: Henk Neuhoff Photography

He said they had a strong outfit for team time-trial over 26.5km tomorrow, but would be focused on what they needed to do to land the overall lead.

“We believe tomorrow’s stage could have a telling effect on the general classification.”

The time-trial will be followed by Thursday’s queen stage over 127km, which includes two climbs, with Bainskloof Pass being done early in the race and then in reverse later on.

Polish rider Maja Wloszczowska held onto her lead in the women’s race, also sprinting for the line to finish in 3:30:04, ahead of stage-one winner Ariane Luthi.

Completing the podium was Catherine Colyn, who also had a time of 3:30:04.

Competing in her first Tour of Good Hope race, Wloszczowska, who will ride with Luthi in the Cape Epic later this month, was thrilled with the win.

“It is really nice to come from a cold and snowy Poland to ride in the Cape Winelands and it was great to take the stage,” she said.