South African endurance cyclist Kevin Benkenstein is currently tackling a six-day journey from Cape Town to Johannesburg in a bid to smash a world record and raise awareness about heart health.

He is riding alongside fellow mountain-bikers Pieter Seyffert and Dion Guy in an attempt to visually bring the country’s heartbeat back to rhythm. 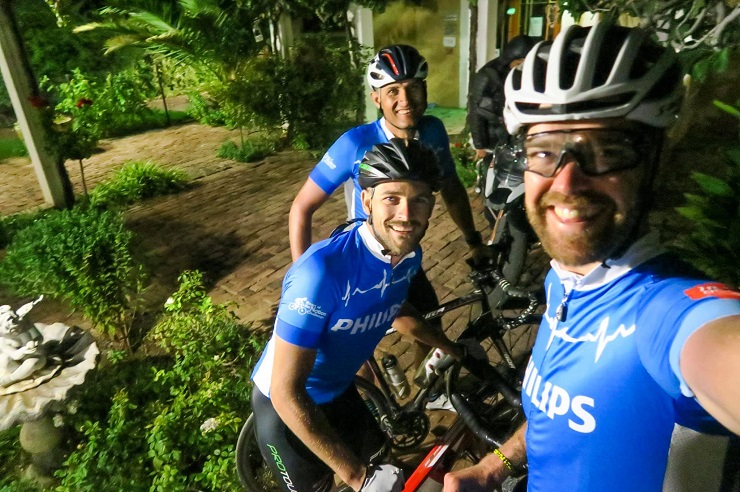 Kevin Benkenstein (front) is on a six-day journey from Cape Town to Johannesburg, along with Pieter Seyffert (middle) and Dion Guy (back), in a bid to break a world record and raise awareness about heart health. Photo: Facebook/Kevin Rodney Benkenstein

The record he is attempting is the Guinness World Record for the world’s largest GPS drawing (digital ECG heartbeat) on a bicycle by an individual.

Due to Benkenstein being nominated to get the record, if the trio are successful he will be the one to receive it.

The team have undertaken the challenge in a bid to raise funds for an automated external defibrillator for The Heart and Stroke Foundation of South Africa.

Before the Heart of the Nation Challenge started Benkenstein said on social media that he couldn’t pretend he wasn’t a bundle of nerves. But he was also very excited.

“I feel pretty damn lucky to spend the next week riding across the country, falling in love with it again and again and again, and even better doing it for such a good cause.”

A couple of hours before the journey started, Benkenstein said he had not given much thought to the actual physical exertion ahead, but he felt the next few days might hurt.

“I love some 18-hour back-to-back-to-back days, but I realise this is kind of hard and is going to take a big effort to get through. So I’m glad I have a really good reason to be doing this,” said Benkenstein, who added that cardiac arrest was something that had affected his family.

The route is a mix of on- and off-road riding and traverses some of the hardest routes and most scenic areas of the country.

After the first leg of the ride, Benkenstein said on his social media that it was an “absolute belter” of a day riding from Cape Town to Ceres and then into the Tankwa Karoo National Park and up to Sutherland.

“There were rough roads, endless straights and in the end a 30km climb in the dark to let it all sink in.”

After their second day Benkenstein said they tackled some new and old roads, enjoyed some café stops and had dinner in Victoria West.

“I love riding out here; it’s just a special place to be.”

The three riders are currently tackling their third leg and aim to arrive in Johannesburg on April 5.