Robert Hobson was happy with his second place in the weekend’s Swartberg100, his first gravel-racing experience.

He said he had no expectations going into the event as he had never raced over such a long distance before. He was referring to the 170km Gran Fondo that featured 3 000m of ascent and 79km of gravel in three sectors in the Prince Albert area.

“I’m happy with second in my first race over that distance. I did what I could to try and win but near the last climb I had to be realistic and use what energy I had left to get myself to the finish.

“I had no idea what to expect, but I still went in aiming to win. I knew between the two of us [Erik Kleinhans and myself] we stood a good chance.” 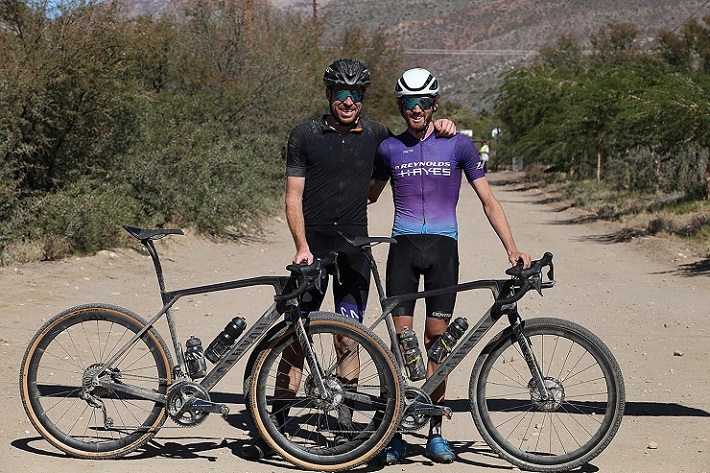 “The route was mainly rolling terrain with a mix of tar roads and gravel sections. It had four main climbs with the final one being the Swartberg Pass which we started after around 140km,” said Hobson.

“Although there was amazing scenery we didn’t get to see much for the first half of the race as we were riding in thick mist.

“The weather was perfect, with a slight head-wind in the last half.”

The 21-year-old added that the racing was fairly comfortable with a few attacks and breakaways along the way, which were caught later on.

It was after the second water point, before Swartberg, when they hit the last gravel climb with 70km remaining, that Kleinhans went to the front and upped the pace.

Hobson followed and they managed to establish a gap as the rest of the group could not follow. At the base of the Swartberg Pass they had a lead of six minutes.

“Having missed the water points earlier and feeling fairly empty, I stopped to fill my bottle under the pass and Erik continued riding.

“I hoped to catch him going up, but there wasn’t much left in me and the pass is quite a monster after 140km. I tried my best to pull back time on the descent, but the gap to Erik was too big.

“I could see him in the distance on the last gravel stretch but couldn’t do much about it. I knew there was a big time gap to third and so decided I would settle for second.”

He added that it was always “lekker” to race with Kleinhans and that they did not actually compete against each other but rode as a Canyon South Africa team.

“The plan was to get me to the base of Swartberg where the long climb suited me better. But I was spent by the time I reached the base and so Erik rode ahead, still looking strong.”

Hobson said there were a few obstacles, but as long as he conserved energy where necessary and raced smart he knew he would be okay.

“Not being used to a race of this distance I knew I’d have a tough time near the end. I focused on riding consistently [so as] not to blow up.

“The main obstacle physically was the pass and I didn’t know what to expect as I’d never ridden it before. The corners never seemed to end and the climb just kept on going up. It was tough, to say the least, but an amazing experience.”

He added that the route was definitely a highlight and he was in awe of the scenery and the places they rode through.

“It kept me wondering why I had never ridden there before. The overall vibe within the ‘peloton’ was also great. There’s something about the feeling and vibe of gravel riding that made it such an enjoyable experience [before the start].”

Hobson said he enjoyed the route, for which he chose a gravel bike, and felt it had a nice mix of gravel and tar sections.

“It was more undulating until we hit the pass, which is the final proper climb before the finish. Being a lighter rider I knew it was my best chance at getting away. My problem was just to conserve energy over the 140km leading up to the pass – that didn’t suit me too well.

“My bike ultimately provided more comfort over the rough terrain while still being stiff and fast when the racing got going. It made the race such an enjoyable experience and I felt right at home on the route.”