Sarah Hill picked up her first Cradle Traverse win after a dominant display throughout the three-day mountain-bike stage race that finished in Muldersdrift, Gauteng, at the weekend.

“I feel really good after winning the solo women’s race. Last year I came second to Amy [McDougall], so it was nice to hold the standard high. 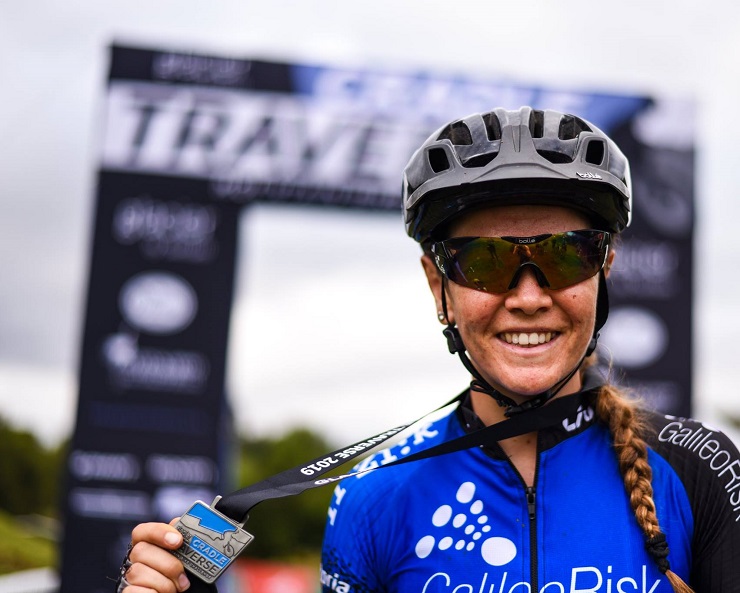 Hill said the 36km opening stage went through the Avianto trails, which was familiar terrain for the Johannesburg local.

“There was just one nasty climb and because the race was so short it was very explosive and you could give it your all.

“It also rained, which was very tough to deal with. You’re already going as hard as you can and pushing your limits, so on top of that it rains. You had to have quite a lot of resilience to get through stage one.”

She added that the second stage, which covered 46km, was “single-track heaven” and she loved it.

“Cradle Moon was so much fun to race and on top of that it was just as muddy as ever. It was a real slip and slide kind of day and an opportunity for me to shine technically.”

Hill said the 41km final stage was “like a power day”.

“We hit Kings Kloof, which was absolutely stunning. They only gave us a little taste of it, so I hope they extend the race next year.

“What was challenging was the amount of rocks. It was demanding on the body and you had to understand how suspension works to flow through the single-track.

“You can’t just hammer it because that’s when mechanicals happen.”

She added that she had to learn how to go outside her comfort zone.

“This was a race to see how far you can push yourself when it comes to burning your matches. You still have to pace yourself, but not as much.

“It was an opportunity to learn how to breathe heavily, find your flow and test your fitness. It was a great place to overcome those challenges.

“Having the opportunity to race in rain and mud automatically leaves you finishing the race a better rider, because you had to control your bike in the mud for many hours.”

She felt the route suited her strengths on the first two days as she was a naturally explosive rider.

“On stage three I had to knuckle down and push hard. This route definitely suits all the different types of rider.”

The 25-year-old will make her way to Namibia for the African Continental MTB Cross-Country Championships this weekend.

“It will be an incredibly tough race and everyone is going there deliberately to shine, but I am very excited.

“The biggest reason I’m going is for SA and it’s a chance to race for our country and hopefully try and get another person qualified for the Olympics.”