Sarah Hill is hoping the technical sections in the Cradle Traverse mountain bike race will put her in touch with her mountain biking roots ahead of the African cross-country championships in Windhoek, Namibia, next weekend.

Hill, who recently won the African jersey at the Cape Epic alongside Theresa Ralph, said single-track was essentially why she started riding and to have a stage race with such a high percentage of it was “attractive” to her. 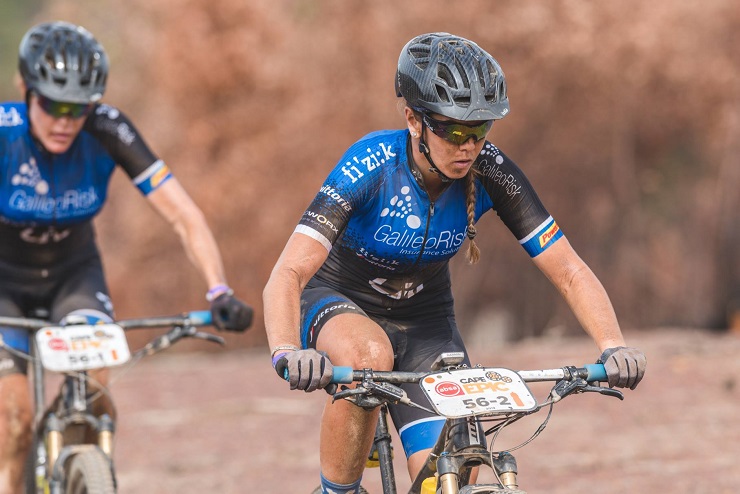 Sarah Hill, pictured during the Cape Epic, will use this weekend’s Cradle Traverse as preparation for the African cross-country championships in Windhoek next weekend. Photo: Henk Neuhoff Photography

“Getting back in touch with that as I prepare for the cross-country champs is super important. I want to be confident going into rocky sections and I really just want to let the brakes go.

“I’m excited for the champs. I have no idea where I’m going to come or how I’m going to do, but I know this race will help me get the right intensity in my legs to prepare for it.”

Hill also felt excited to be competing in her hometown, with the three-day event being based at Avianto in Muldersdrift.

“Coming from Johannesburg we’re central to everything but we always fly or drive everywhere, so it’s nice to have an opportunity to show off how many trails we have that are so much fun and playful.”

The Galileo Risk rider was second in last year’s Cradle Traverse, finishing behind Amy McDougall who won’t be on the start line this time.

“It was like a three-day cross-country race, so it was actually really intense. I was not expecting that, but the performance benefits afterwards were nice.

“This year I plan not to hit it so hard on the first day. It’s important to pace yourself, because it’s still 40km to 50km a day.”

She said the Epic had helped to teach her where to pace herself and when to burn her matches.

“I went and raced a cross-country event in Bloemfontein the weekend after Epic and I felt like I had absolutely no explosiveness [left] and that my legs were lacking that anaerobic high-intensity effort.

“I do feel that Epic has given me an incredible engine. I can rev now at low for a long time and this weekend will help me step up those accelerations to get me back to the playful and bouncy Sarah.”

The event features 36km, 46km and 41km routes and Hill said looking after herself was always important in stage races.

The 25-year-old felt her strengths had always been on the shorter climbs where she could stand and accelerate.

“This race is really fun and attractive for me because there’s a lot of that.”