Waylon Woolcock and Hennie Roux set the pace to take the top podium spot on the opening day of the Liberty Winelands Encounter in the Western Cape today.

Woolcock and Roux were first home in 1:54:22, ahead of Cobus Swanepoel and Neville Cragg (1:57:19). Dawid de Bruin and Michael Dundulakis filled the third podium spot.

The 2017 champion, when he partnered HB Kruger to the title, Woolcock is using this opportunity to help to develop his team-mate’s career.

He has been coaching Roux, who turns 20 tomorrow, for the past two years and said they felt good going into the race.

“We managed to ride away on the first climb and from there it was just a matter of controlling things,” he said. 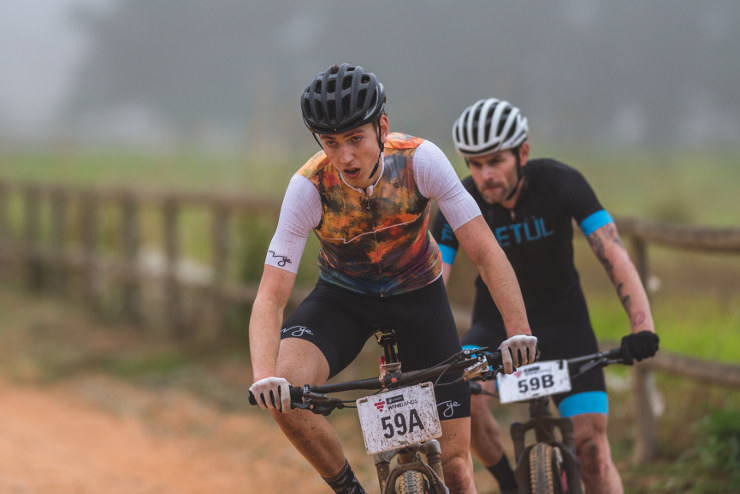 Hennie Roux (front) and Waylon Woolcock won the opening stage of the Liberty Winelands Encounter from the Boschendal Wine Estate to Franschhoek today. The three-stage mountain-bike race ends at the Nederburg Wine Estate in Paarl on Sunday. Photo: Henk Neuhoff

“I was able to use my experience to pass on some advice to him about where to ride hard and where to be a little bit more cautious, so it was a good day for both of us.”

Woolcock added that, as usual, the trails set up for the race had provided a clear indication of what the Cape Winelands had to offer avid mountain-bikers.

“Starting from Boschendal there were some pretty decent, steep climbs and nice single-track.

“From there we headed over to Franschhoek, which is a bit more open with gravel roads and jeep tracks.

“But it is still fairly rough and offers typical mountain-bike terrain, so that was really cool.”

In the women’s race, Alta Kriegler and Sunette Beyers were first across the line, while Andrew Marsh and Anneke Viljoen lead the mixed category.

Cobus Barnard has a two-minute advantage over Simon Bothner in the men’s solo section and Amy McDougall is a clear leader in the women’s category.

Tomorrow’s stage will start and finish at Le Franschhoek Hotel, covering 48km with a total elevation of 1 144 metres.