The 102nd Giro d’Italia, which starts in Bologna on Saturday, may just go down in history as the race that broke Primoz Roglic‘s Grand Tour duck.

The Slovenian has been in irrepressible form this year, winning the build-up events even when he, according to him, did not necessarily target the GC.

In last week’s Tour de Romandie, Roglic won three of the five stages to lift the title for the second year running – ominously the first rider to take back-to-back victories since Chris Froome in 2013 and 2014.

The former ski-jumper also sealed the overall deal at the UAE Tour and Tirreno-Adriatico in the stretch between late February and March.

More importantly however has been his form on both the climbs and in the individual time-trial – the magic recipe of almost all Grand Tour winners.

In Romandie, he showed his form in both disciplines by placing second (by less than half a second) in the prologue, winning on a first category mountain at Torgon and then beating the new UCI Hour Record holder, Victor Campenaerts, in the final-day time-trial. 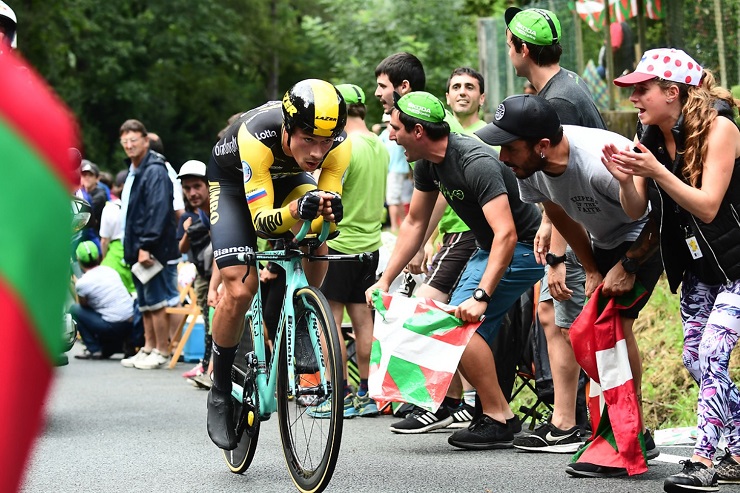 Primoz Roglic, pictured during stage 20 of last year’s Tour de France, has been in top-form this year as he heads into the 102nd Giro d’Italia, which starts on Saturday. Photo: Alex Broadway/A.S.O

With the Giro d’Italia featuring three individual time-trials, two of which are reportedly “hilly”, and a tough final week, Roglic must surely be as good a bet as anyone else to wear the Maglia Rosa in Verona come early June.

By finishing fourth in last year’s Tour de France, the Jumbo-Visma leader proved that he has the potential – and staying power – to stand up and be counted when it comes to Grand Tours.

It was incidentally also at the Tour where he showed glimpses of what was to come when he joined Alberto Contador on the attack in the high Alps in 2017 before leaving him behind on the Col du Galibier to win alone at the ski town of Serre Chevalier.

Although he had won a time-trial stage at the Giro the previous year, he was never mentioned among the GC favourites in three-week stage races until last year. In fact, despite those stage victories, he placed 58th in what was his debut Giro and 38th in his first Tour.

Although almost every Grand Tour winner has cut his teeth in the week-long races that build up towards the Giro and Tour, experts will tell you that success in the shorter format does not necessarily always translate into the same in the longest (and toughest) format.

While the shorter races lend themselves to promoting the in-form riders to the top of the GC, chances of suffering a bad day become proportionately bigger over three weeks of racing. And one of those could sink your challenge in one foul swoop.

Just ask Tom Dumoulin (Sunweb), who cracked on the final mountain of the 2015 Vuelta a Espana to slip from first to sixth overall. The Dutchman however proved that he could put his opponents away over three weeks of racing – winning the 2017 Giro d’Italia after “that moment” on the Stelvio Pass and finishing runner-up in both the Giro and Tour de France last year.

Most pundits are mentioning current Vuelta a Espana champion Simon Yates (Mitchelton-Scott) in the same breath as Dumoulin and Roglic. And a name like Miguel Angel Lopez (Astana) makes more than just the occasional appearance.

If sentiment has anything to do with it, Vincenzo Nibali (Bahrain-Merida) might be in with a serious shout. The Italian is one of only seven riders who have won all three Grand Tours and, after some serious altitude training and a storming ride in the recent Tour of the Alps, he looks as determined as any.

A victory will make him the oldest winner of the Corsa Rosa, but he has made a career out of delivering his best performances when he is up against it – with his 2016 Giro title a case in point.

However, with three rides against the clock including one on the final day, odds are that a pure time-trialist like Roglic or Dumoulin will rise to the top.