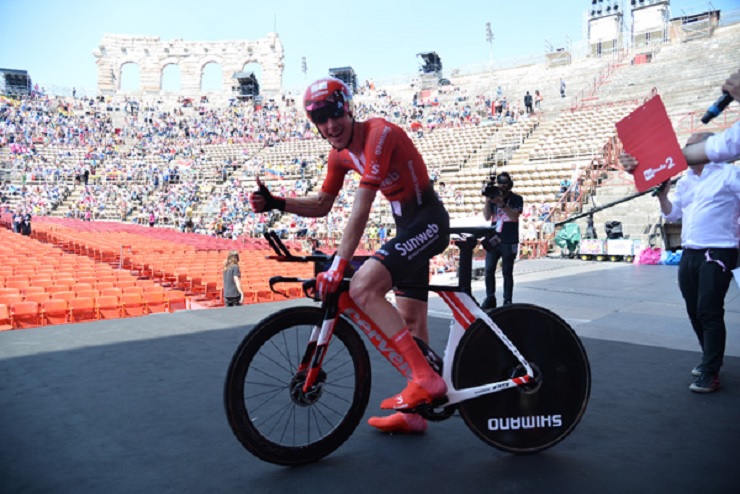 Chad Haga won the individual time trial on the final stage of the Giro d’Italia in Verona today. Photo: LaPresse

American Chad Haga won the individual time trial on the final stage of the Giro d’Italia in Verona today.

“My victory is of course a consolation prize after Tom Dumoulin pulled out. I came in top form but it was a support form. During the time-trial, I kept thinking this is what Tom would have been doing today if he was here,” said Haga.

“I thought today I had a real possibility because the course suited me very well and for sure better than the one of stage nine. As an American, I feel very proud of winning a stage at the Giro d’Italia.”

This year’s title went to Richard Carapaz (Movistar), who also won stage four and 14. He became the first Ecuadorean GC winner in the history of the tour.

“This morning, I knew it would be extremely difficult to win the Giro d’Italia. But I thought I could do a good time-trial. So I gave it all until the end,” said Nibali.

“Second at the Giro is still a good result, especially thinking that six months ago, I was down with a big back pain after the crash at the Tour de France. To be back fighting for the overall victory in a Grand Tour is something positive.”