Winning the women’s road race at the African Games in Morocco today was a “huge” achievement for South African Maroesjka Matthee.

“Through the grace of God I really feel honoured to have won the African Games road race. I felt each and every prayer coming from SA,” said the 30-year-old.

“This victory is huge for me and Team SA, more importantly. We need the UCI points and we got them.” 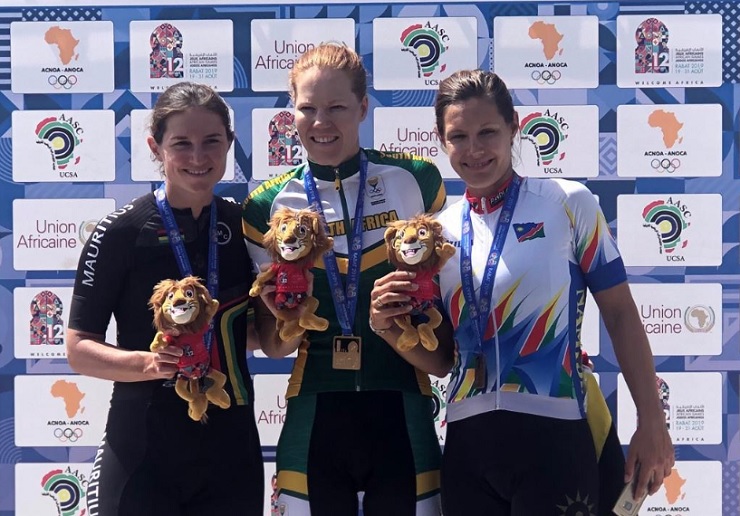 Matthee said following numerous consecutive attacks from her team, their captain Ashleigh Moolman Pasio advised her to attack to create a bit of a break.

“I attacked and no one responded initially. I got a bit of a gap and then saw Namibia was chasing it down.

“When the rest caught up I saw it was a whittled-down group. We were about 10 girls in the break.”

She said she had not known it, but there was “a huge crash at the time when I got away that took out Zanri [Rossouw] and Ashleigh”.

“The break got to over a minute and I knew I could back myself for the sprint. I just had to ride smart.”

She knew Halbwachs was going to go for a long sprint so she made sure she was not boxed in and could get on her wheel quickly if she had to.

“It worked out that way and I managed to kick over her with 100m to go.”

She added that she felt confident throughout the race. Her teammate Joanna van de Winkel was with her in the break and encouraged her to believe in herself, which helped a lot.

“I did believe in myself for the sprint. Obviously we had team plans, but those changed quite quickly when the crash took out Ashleigh and Zanri.”

Matthee said what she learnt from this year’s Games was to never underestimate one’s abilities when facing hardships.

“Always look to the positive. A positive mindset is a winning mindset. It can change so quickly.”