But a woman is still the fasted person on a bicycle. American Denise Mueller-Korenek holds the world record for paced bicycle land speed which she set in September last year at the Bonneville Salt Flats in Utah, by travelling at an average of 296.009km/h.

Campbell, who also broke his own European motor-paced record last year, said he was exhausted after his attempt which he executed on a custom-built bike that was pulled to speed by a Porsche Cayenne before being released.

“There’s so much intense work and planning that went into the logistics, travel and testing that the whole team were tired before the actual event even started,” he said.

“After a couple of days it’s starting to sink in a little. It’s been a 25-year road for me to get this far, so I suppose it may take a while to get used to.” 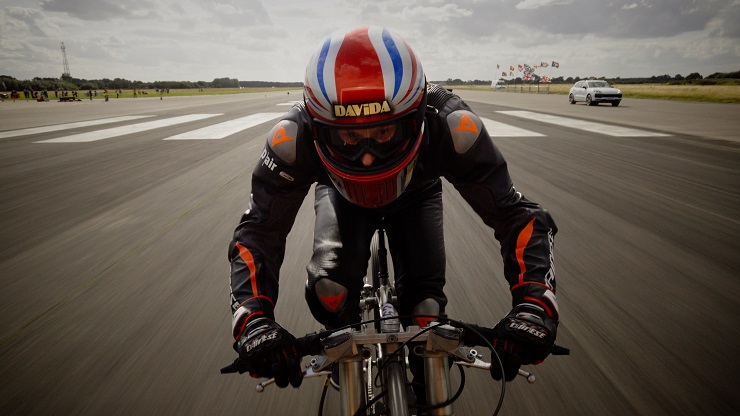 The 45-year-old said breaking the record, which was held for the past 24 years by Dutchman Fred Rompelberg who reached 268.83km/h in 1995, came as a surprise to him.

“We’d been testing on the Thursday and Friday and it hadn’t gone well. Mainly the weather was terrible so we couldn’t get many runs in at speed, and the ones we did do I experienced horrific turbulence.

“Even the car struggled to get anywhere near record speed, so honestly I didn’t think we’d get close, let alone beat it.”

Campbell said due to the previous weather and lack of testing they were unprepared so decided to take it slow and use both Saturday and Sunday to try and get as fast as they could, essentially testing as they went.

“The record seemed a little out of reach, but we’d hoped with good weather that there was still a chance. We were checking the forecast every 15 minutes and although it was dry the wind was all over the place.

“It became apparent that the Saturday was the best day and Sunday wasn’t good. The first run was at 241.402km/h, which seemed too slow for the turbulence I was suffering.

“After discussions with James Croxford, the aerodynamics engineer from Harper Adams University, there was a theory that it wouldn’t get any worse if we went faster, so really it was a leap of faith.”

The next run was clocked at 275.198km/h average, which was disallowed as there was a malfunction with the cameras used to ratify the record.

“Because we hadn’t tested this fast before I wasn’t expecting the air pressure sensations and obviously because going 32.1869km/h more, the braking distance is less.

“The result being I misjudged the separation from the car’s slipstream, locked up the back wheel which spun the bike sideways and careered toward the back of the car, which by this time was also decelerating.”

He said there was then a lunch break, which possibly wasn’t a good thing for him as it gave him time to think about what had just happened and he had to give himself a stern talking to.

“We emptied the tanks on that last run, flooring the Porsche Cayenne. The wind was at our backs and we managed to release the tow-line way over a kilometre away from the gates, accelerating all the way and deep into our braking zone.

“The feeling afterwards was utter relief, partly because we’d all survived but because despite a high probability of failure, we did it.”

Campbell said the highlights were seeing the joy of the team and the relief all round knowing how lucky they were with the weather on the Saturday and that they had managed to push the runway, car, bike and weather to the absolute edge.

“As it transpired we wouldn’t have got anywhere close on the Sunday as the weather changed.”

Currently, Campbell was feeling all kinds of emotions.

“It’s now Tuesday, I think, and I’m just coming round to ‘normal’. I’m mentally drained. This whole process is like one fast run with lots of noise, intensity, effort and then silence and calm.

“Physically I’m not too bad, but my legs have definitely been smashed and bruised. I’ve heard that ‘chicks dig scars’ though, to quote Evel Knievel.

“Emotionally I’m simply grateful, honoured and privileged to be part of such a dedicated band of people who I’m fortunate to call my friends.”