Annemiek van Vleuten, who went clear from the leading breakaway at 104km to the finish, delivered a remarkable performance to win the elite women’s road race at the UCI Road World Championships in Yorkshire, England, today.

“It was actually not planned. I wanted to go hard on the climb because I thought it would be good for our team but I just saw a gap,” said Van Vleuten.

“People know me for training a lot of hours and that definitely helped me to be ready for such a big effort.”

With just under 40km to go, Van Vleuten had a comfortable gap of over two minutes while the number of chasers dropped to four due to a move from Dygert. 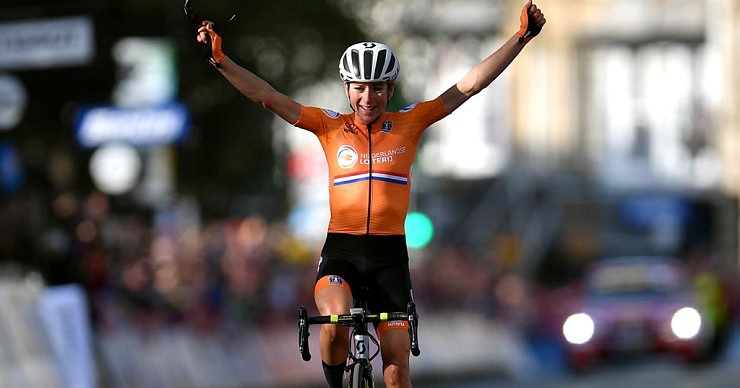 The 22-year-old Dygert accelerated again as the group hit the Oak Ridge climb, with 33km remaining, and managed to get away but was caught with 12km to the finish.

Dygert, who won the ITT on Tuesday, was dropped as the chasers hit the 9km mark.

With 4km to the finish, Van der Breggen seized the moment and rode away in pursuit of second as her teammate Van Vleuten claimed victory.

“When I passed the line I felt so many emotions. My mother is here so it was really special for me,” said Van Vleuten.

“It was such a big dream for me. I really enjoyed everyone who was cheering for me and taking the win gave me goosebumps.”

She said she was disappointed after Tuesday’s ITT, but to finish the world champs with a 100km solo ride to the line was unbelievable.

Ashleigh Moolman Pasio was the highest placed South African when she finished eight.