Slovenian Tadej Pogačar survived a late rain storm to win stage nine of the Vuelta a España at Cortals D’Encamp in Andorra today.

The 20-year-old UAE Team Emirates rider collected the biggest win of his fledgling career as he beat Nairo Quintana (Movistar) into second – the latter finishing 22 seconds down after a major showdown in Europe’s mountain kingdom.

“This stage was incredible. I was looking at it since I started. Yesterday when I saw the weather I was happy that it was going to rain,” said Pogačar.

“I tried to follow the attacks and I went full gas on the gravel section. It was great.”

Primož Roglič (Jumbo-Visma) and Alejandro Valverde (Movistar) finished at 49 seconds after the group of leaders splintered on the final ascent, which actually consisted of three seperate climbs that were patched together.

Quintana, who beat Chris Froome to win the race three years ago, did enough to ride into the overall lead ahead of Roglič after red jersey wearer Nicolas Edet (Cofidis) faltered on the short but mountainous stage.

Like two days ago, the former champion was again in an attacking mood on the finishing climb and went clear of the main group of contenders – with Pogacar on his wheel – after an initial surge by teammate Alejandro Valverde.

At that point another teammate, Marc Soler, was leading the stage by half a minute with around four kilometres left. The Movistar domestique was however asked to wait for Quintana to help him gain maximum time in the hunt for the red jersey and the Spaniard was noticeably upset by the team’s decision.

Just before Quintana could latch on to his wheel, Pogacar took his chance and attacked past Soler to go into the lead. Soler waited for Quintana and paced him up the climb until he ran out of steam, leaving the Colombian to set his own pace in pursuit of Pogacar over the closing couple of kilometres.

Miguel Angel Lopez, third last year, threw the cat among the pigeons when he attacked on an earlier climb and established a solid advantage before going down on a slippery gravel section and losing his lead.

He started the final ascent with the race favourites, but paid for his efforts to lose just over a minute. However, it was not all lost for the Astana leader who started the day over three minutes down on GC and finished the stage just 17 seconds behind the new leader. 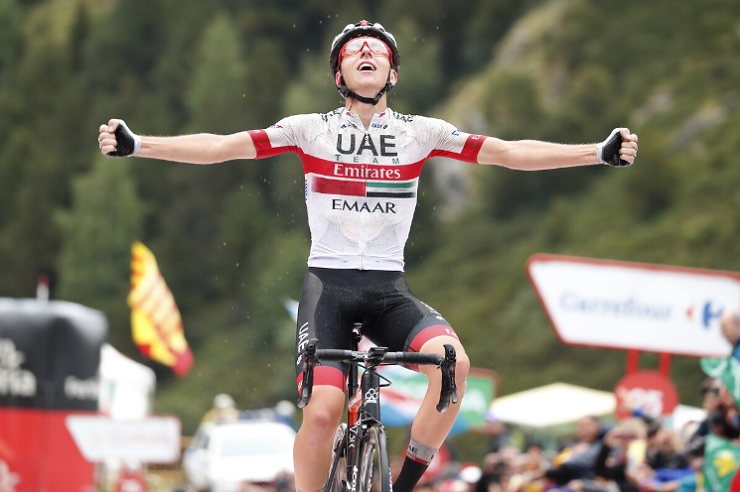 View the results below.