The route for next year’s Giro d’Italia, which starts in Hungary on May 9, was unveiled at a launch event in Milan last night.

Proceedings kick off with an individual time-trial in Budapest, followed by two sprint stages.

Riders will then make their way down south to Sicily where they will begin their ascent of the Italian peninsula on stage four.

The next stage will see the first altitude finish of the Giro, which will be followed by a final stage on the island.

A fast eighth stage will be followed by a testing ninth before the first rest day. 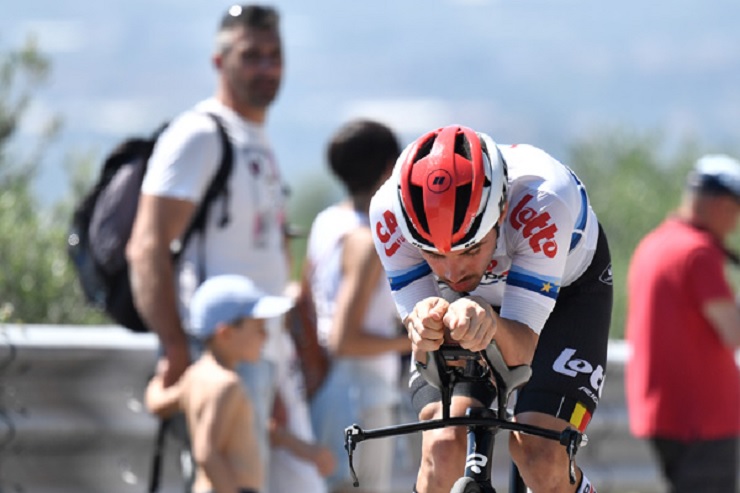 Victor Campenaerts during the time-trial on stage 21 of the 2019 Giro d’Italia. Photo: LaPresse

The race resumes with four long and challenging stages – ranging in length from 180km to 212km – before a demanding second individual time-trial.

This will be followed by a key stage, stage 15, that will start from the Rivolto air base, before the second and final rest day.

The final and decisive week kicks off with a stage in the Friuli region followed by the 202km stage 17, the queen stage, that includes over 5 000m of climbing.

The 18th stage will be one of the hardest in this year’s Giro, while stage 19 is the longest of the event. This 251km monster might also be the final opportunity for the sprinters to stake a claim.

The mountainous penultimate stage heads for the hills immediately, with the route going up towards the Colle dell’Agnello.

A flat third individual time-trial of 16.5km on May 31 draws the curtain on next year’s edition.

“I really hope to be at the start of the Giro next year,” said the winner of this year’s event Richard Carapaz.

“It is a very interesting route with stages that present many surprises. In the last week there are a lot of mountains. The [Passo dello] Stelvio could be decisive; I really hope to be there.”

Three-time world champion Peter Sagan announced that he too would be at the start in Budapest.

“It’s still a few months away but I can announce that I will be there.

“I really like this route, right from the first stages in Hungary. I am sure there will be many of my supporters on the route for the first three stages because Slovakia is very close to Hungary.

“But we will also enjoy the stages on the Italian roads, as I lived and used to train in Italy. It’s a nice Giro route; the first part suits me best but I will try to stay until the end in Milan.”