Moolman Pasio faced issues such as unusually tired legs, not having teammates to call on for support and various logistical problems, but ultimately rode her way to a top-10 result.

“Unfortunately I really struggled to get into the race. For some reason my legs were just not feeling all that good, but I tried to stay calm and hoped to get into it. As we were going along my legs started to feel better,” Moolman Pasio told In the Bunch.

She said there was a struggle for position as they hit the Lofthouse climb, 40km into the race. The 4.5km ascent averaged six per cent with a maximum gradient of 18.6 per cent. 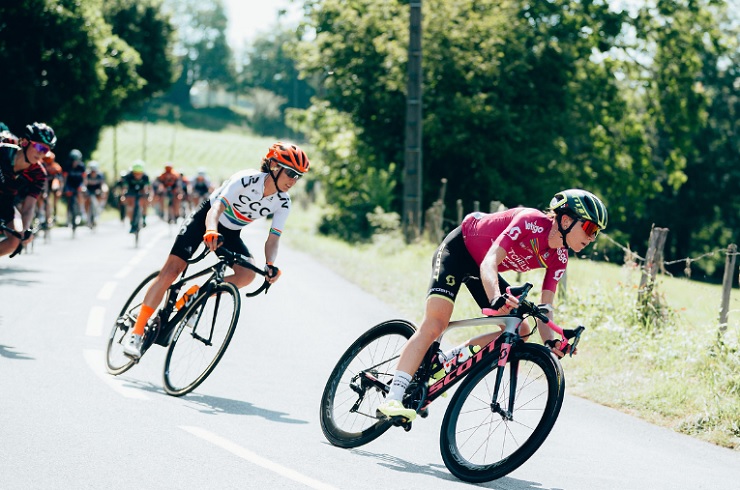 “The roads were really narrow entering into the climb. Also, when you’re an individual – as I basically had no teammates who could help me with positioning – it made it that much more difficult to find your place because you have lead-out trains from teams and they don’t take the individuals seriously.

“You’re on the back foot because you don’t have riders around you helping you, so already that was not ideal. Sort of at the last minute I managed to kind of get onto the Dutch train, but not exactly, so as we hit the climb I was further back than what I would like to have been.”

She added that she managed to move up enough to go with the split, but not enough to follow eventual winner Annemiek van Vleuten, of the Netherlands, as she was boxed in.

Moolman Pasio then tried to go with the group behind Van Vleuten and just before the top of the climb the UK’s Lizzie Deignan accelerated.

“That just put me into a very uncomfortable position. My legs just really blew up and so I couldn’t follow them and I found myself in kind of an awkward place because I had just missed that split but was way ahead of the rest.

“I was on my own for a little while in between until the main peloton came from behind and that was when I realised that I just had to play the safe game and take the risk of sitting in, eating, drinking and trying to feel better.

“I just hoped that another nation would chase and that the girls who did break away on that climb would eventually pay for it because it was a far way out from the finish and the nature of the course was that it just accumulated as it went along. It became harder and harder, and if you’re spending so much energy 47km in . . . I really hoped that that would take its toll.”

Moolman Pasio said it did take its toll on a number of riders in the breakaway, one of whom was Deignan, a favourite.

“Unfortunately there was no real cooperation in our peloton. There wasn’t really a proper chase because most countries had some kind of representation in the breakaway, which meant that although the gap didn’t go totally out, it didn’t stay close enough to keep the peloton in contention for medals.

“As some of the riders from the breakaway came back into the peloton, that was when I started to realise that, wow okay, there was still an opportunity for a top-10 result.”

As they hit the Harrogate finishing circuit her legs started to feel better and she found herself getting more into the race.

“As the kilometres ticked by I went from thinking that I was having the worst day of my life, not knowing what had gone wrong and thinking it was all over for me, to slowly but surely keeping my mind focused and trying to stay positive.

“For the last two laps I felt very good. My motivation also improved when I saw the others start to come back into the peloton.”

She tried to put in a dig about 3km from the finish to see if she could shake off some of the riders to make it easier to enter the final corner.

“It was quite a fight for that corner. I didn’t have great positioning coming into it, so I was a little bit further back than what I would have liked.

“This meant that as we hit the corner I put in an effort to get further to the front, onto Marianne Vos’s wheel. She launched the sprint and I went with her. I was very happy to finish eighth, especially considering how the race started for me.

“Obviously I would’ve liked to be on the podium, but circumstances didn’t allow for that.”

Moolman Pasio felt it was not easy to come from a country like SA and take on the bigger cycling nations.

“For us there was just a whole lot of underlying stress around complications with last-minute confirmation of accommodation and other financial logistics.

“If you just take all those things into account, I’m really proud of the result I managed to pull off considering my situation in comparison to the others who finished in the top-10.

“I do need to say a big thank you to Team Dimension Data principal Douglas Ryder for the use of his bus and sending staff, mechanics and bicycles. It definitely went a long way in making us a lot more comfortable. Without him it would’ve been way tougher.”

Moolman Pasio will now return to SA for the Africa Cup, which will be followed by a World Tour race in China.