Nolan Hoffman knew exactly how to exploit the windy conditions when he won the men’s road event at the National Classic Cycle Race in Brakpan, Gauteng, today.

He said the race started extremely fast, with a tailwind over the first 20km.

“When we turned right at Nigel all hell broke loose.”

The 34-year-old said the crosswinds started to make an impact and Team Office Guru split the field in two.

“I was in the second group with my teammates David [Maree] and Steven [van Heerden].”

He said they never panicked and the riders in his group contributed to chasing down the leading bunch.

“They (the leaders) never got more than a 20-second gap on us and not long thereafter we were all back together.” 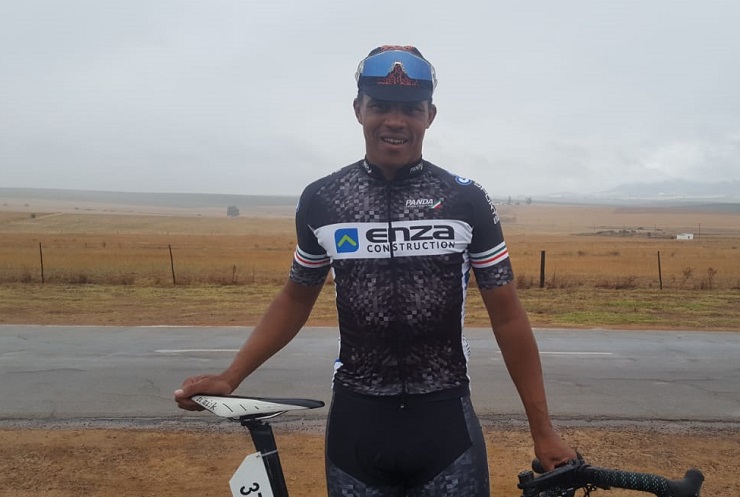 But with 30km left of the 110km event the peloton split again.

Hoffman, who also won the event in 2016, was in the lead group, taking with him six other riders (Louis Visser, Jason Oosthuizen, Dusty Day, Marc Pritzen, Ryan Terry and Dylan Girdlestone).

“We stayed away and I could follow all their attacks.

“Even though I was outnumbered in the final moments of the race, my knowledge of riding in windy conditions brought me the win ahead of Visser and Oosthuizen.”

He said the wind was definitely the deciding factor today.

“Before the race I was hoping for such weather conditions and I must say it was pumping today!

“I’m good in the crosswinds and today it just showed again.”

While happy with his victory, Hoffman, who lives on the West Rand of Gauteng, said it had been a tough season for him.

“I haven’t won a lot and a race seldom comes down to a sprint so riders like me don’t get many chances to win.”

He said this triumph had given him a big confidence boost and showed he had good form ahead of next month’s 947 Ride Joburg.