October has been declared Mental Health Awareness month and South African Willie Smit has some strong views about its importance in the competitive world of professional cycling.

The 26-year-old Katusha-Alpecin rider said mental health played a vital role in the daily life of every person, but especially professional athletes.

Being a pro cyclist could definitely aggravate mental health issues due to the pressures involved, he said. 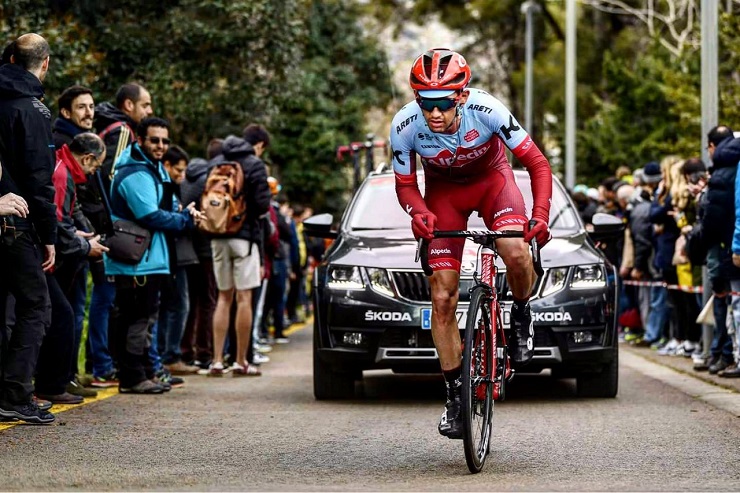 Willie Smit has shared his views about the importance of mental health in the competitive world of professional cycling. Photo: Namuss Films

“The daily pressure that is placed on professional athletes is enormous,” Smit told In the Bunch.

“Your ‘job’ never stops and every single thing that you do – for example what you eat, how active you are off the bike and how you do your recovery – can possibly affect your performance, which indirectly affects your current as well as future contracts.”

Smit added that when involved in the sport at such a high level one quickly realised how dispensable one was.

“Living a minimalistic life is the easiest way to stay focused – a lifestyle which is purely based on eating, sleeping, training and repeating. It’s absolutely brutal.

“At the moment everyone is in better form from very early on in the year – faster, fitter and skinnier than before and the pressure to arrive ready [to compete] has grown on us as athletes tremendously.”

Personally, Smit said he had on occasion had to use anti-anxiety medication to prevent his freezing up.

“The only real way [to cope] is to spend time alone with your thoughts away from any distractions and let your thoughts run their way.

“Just let whatever is happening in your life be and make peace with it. The sooner we do that, the sooner we can move on. Obviously it’s much more complicated than that, but it’s a start.”

By sharing his life experiences and tips on his YouTube channel, Smit tries to inspire and motivate young people to enjoy cycling and to give their best without over-exerting themselves.

“At the same time though, I’m fighting my own demons as are many other people out there.

“The law of attraction is real whether we like it or not. The sooner you’re able to exclude things that negatively influence your thoughts, the happier you’ll be. And success goes hand in hand with happiness.”

According to Smit, there are a number of factors in the sport of cycling that could cause mental health issues.

“Firstly, the constant challenge to perform at your best throughout the whole season. This includes being on top form with your fitness, strength, as well as your weight and diet every day.

“Crashes, injuries as well as illnesses and diseases always play a big role as they affect your performance and create unnecessary pressure during the season.

“Then, contracts and contract extensions are never guaranteed in your ‘job’. In the current pro peloton it’s a constant battle for a team to perform at their utmost against the best in the world of the current pro riders, as well as against the young and upcoming talent.

“Lastly [there is] admin and politics, as in every other job. Cycling definitely has its fair share of this, and to try and deal with these politics while you are physically and mentally tired from all the training and racing is a challenge on its own.”

Smit said it was important to be mentally healthy as it affected one’s whole system and formed the basis of one’s drive.

“If you’re not mentally fit and ready, everything can become a struggle. Even though you may not feel how it affects you on a daily basis, it adds up until it ‘bursts’ one day.

“So it indirectly affects everything you do and how you do it – from sleeping patterns to motivation to going out and training.”

He added that mental health was specific and unique to every individual and should be addressed on a daily basis.

“It’s important to know how to be more mindful and how to deal with psychological and mental matters on your own, as part of your daily routine, and to be able to identify when you need a ‘time-out’ and then to have the confidence to take it appropriately.

“Never be ashamed to speak up and/or to seek professional help. There are people out there to help with guidance and coping mechanisms. It’s nothing to be ashamed of.”