Matt Beers and Wessel Botha claimed three consecutive stage wins in defending their title at the Wines2Whales Shiraz that finished in Onrus yesterday. 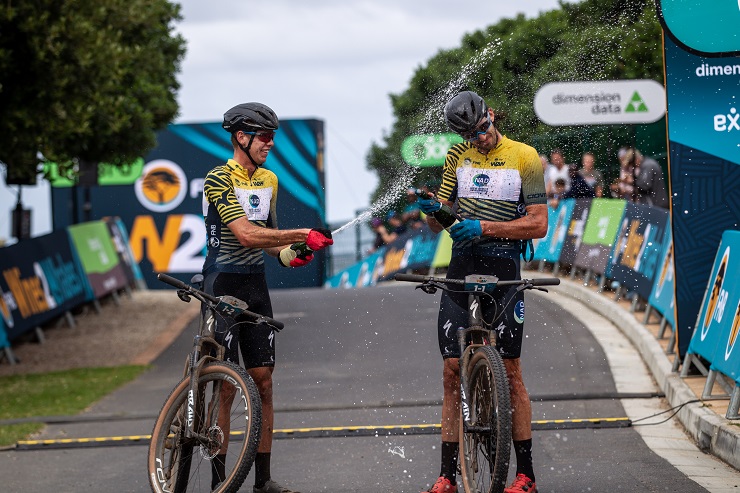 Beers said returning as defending champions was never going to be easy.

“There is always extra pressure and it doesn’t happen often that a team can defend their title.

“To get three stage wins in doing so was just a bonus. I’m really happy to get another win.”

Botha said on the final stage they set quite a fast pace from the outset.

“The plan was to test the other guys a bit. On the Houw Hoek climb we saw DSV Pro Cycling struggling a little bit.

“So we knew we were the stronger team. On the Kat Pas we took it easy to avoid punctures and they rejoined us.”

Beers and Botha and the team of Heyns and Du Toit went through waterpoint one together. The former pair then attacked before the open climb towards the second waterpoint.

“On the climb to the Art House, Matt wound it up and we managed to get a gap,” said Botha.

“From there it was just heads down to the finish. We went full gas on the road sections but took it a little easier on the singletracks to avoid any punctures or mechanicals.

“Luckily we could hold it to the finish and take the third stage win.”

Heyns said the R50 000 prize money for second was still a nice bonus as the end of the year.

“Matt and Wessel rode really well. We tried our best, so second is not too bad.

“Today we kept up with NAD really well. When they decided to really go, we just didn’t have the firepower to follow them. But luckily, we could still hold onto second overall.”