Bianca Holtzkampf successfully played her part in leading the Tiletoria Train to a second-place finish at the Double Century in Swellendam on Saturday.

The team also retained their course record of 5:38:00.

“The wonderful thing about any event is coming over the line knowing you gave it your all and that you raced positively as a cohesive team,” said Holtzkampf. 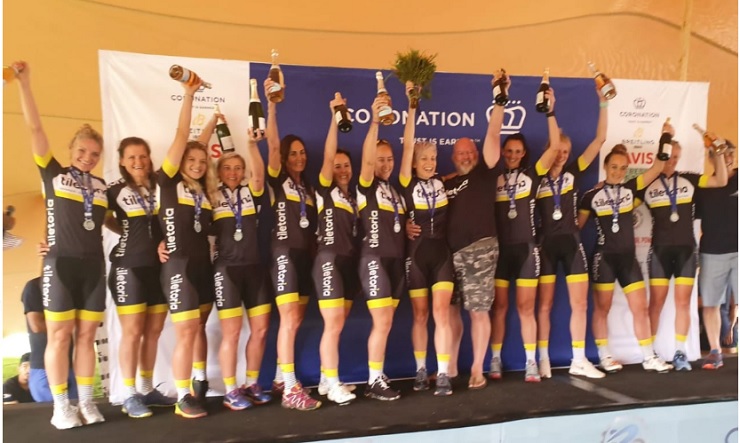 The Tiletoria Train placed second at the Double Century in Swellendam on Saturday. Photo: Supplied

She added that the winning team were stronger on the day and they raced well.

“If you give it your all and you are beaten by a stronger team, they deserve the win.

“We felt very positive about how we raced. We kept the team together up to feeding zone one, opting for a slower first-half to save some legs for the gruelling second phase of the event. The team worked together very well.”

Holtzkampf said it was no surprise that Private Client Holdings caught them within the first hour of the race.

“We stuck to our plan of riding together until the first feeding zone. At this point we were in third place. We knew we would be strong in the second phase of the race where our time-trial specialists took the bull by the horns and paced really hard.

“When we entered the second feed zone, with tired and fatigued legs, we knew we had given it our all and there was only the last 40km to go.

“The time splits indicated we had made up some time and we were going to give it our all in the last phase.”

Holtzkampf said their tactic was always to keep the team together for the first half of the race.

“Although you could go harder with fewer riders, you never know the price you will pay later on in the race.

“It also creates a cohesive team environment where each rider can feel the difference they are making in contributing to the team’s effort.”

She added that due to it being a long race anything could happen in the final 80km.

“It’s often the case that riders who struggle in the second phase come back to be one of your six finishers as the climbers are always strong on the last three hills.

“We also made good use of the breaks in the feed zone to regroup as a team.”

Holtzkampf said with the new women’s format, where the starting order was rearranged to allow no interference from slower open or mixed teams, they had the opportunity to enjoy the view on Tradouw’s Pass.

“In previous years you would be surrounded by other teams jostling for a piece of road for your team to race on.

“We also found the other teams were very amicable on the route towards the women’s teams and I would like to thank David Bellairs and his team for allowing this format of racing.

“It also meant we faced few obstacles in terms of other teams interfering in our race, barring two incidents. When we encountered these I just asked the other teams to please allow us the freedom of the road so that we could race our bikes.”

Holtzkampf said she felt elated with a podium finish and just loved the team format of the race.

“The camaraderie of suffering together is always spoken about for years after the event is done.

“I’d like to thank all the other women’s teams for the camaraderie on the day and the positive racing.

“Our goal is to come back stronger next year to improve on our current course record.”