Jono Cloete and Lloyd Robinson took a winning mixed-team formula to the Double Century and succeeded again last weekend. Earlier this year their Double 90 mixed team won and broke the record by 11 minutes.

“We had two objectives in mind for the Double Century,” said Robinson, whose team won the 200km team time-trial in 4:55:46, just under three minutes ahead of runners-up Bekker Steel Racing.

“The one was to win the mixed-team category and the second was to break the current record of five hours and four minutes set by the Design in Motion team in 2017.” 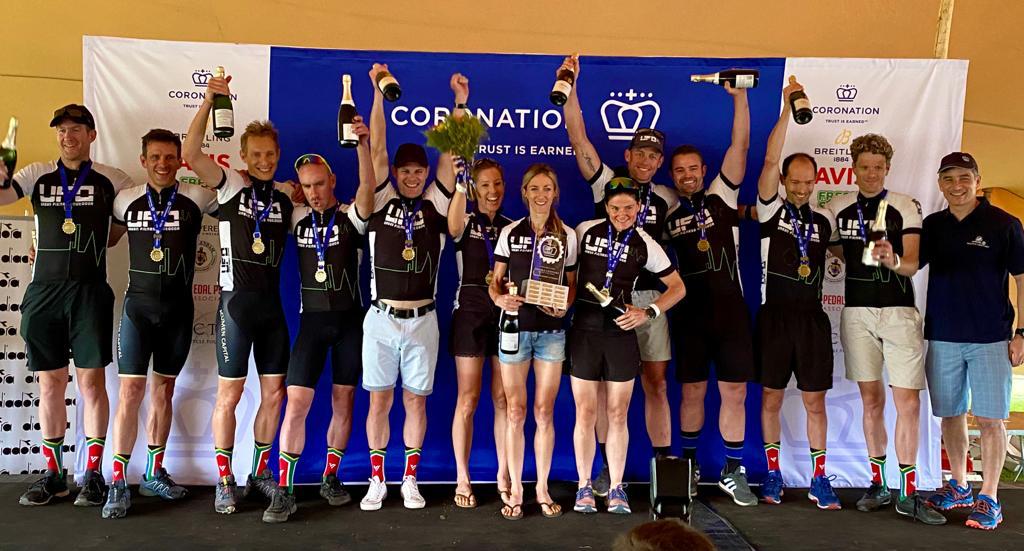 Robinson said they used a similar strategy to the one that gave them so much success at the Double 90, yet made some significant changes to adapt it better to the Double Century course.

“When racing the 12-person team trial-trial format the strategy is usually quite simple.

“You go out and everyone contributes equally and towards the end you drop riders who can no longer keep up with the pace. However, adding three or four women into the equation with eight or nine men massively changes the complexity of the team’s strategy.”

Robinson said it then became a delicate balance of the men going fast on the front yet protecting the women so they could fatigue at a rate that still allowed them to ride hard towards the end.

“We clearly seem to have got this balance spot on and it paid dividends.”

Robinson said in the race it was clear from the start they were up against “another incredibly strong mixed team”, also from Johannesburg – Bekker Steel Racing.

“[They are] a team that on paper I believe were perhaps stronger and should have out-ridden us.

“By the end of the race we had implemented our strategy with military-like precision and we ended up beating them by three minutes, as well as all the other mixed teams.

“As a testament to how strongly the mixed-team category was contested, the top three mixed teams not only all went under the previous record, but all broke five hours. It was an incredible effort and fast ride by all.

“We now believe we are the only people to win the Double 90 and Double Century in the same year and also to have broken the record in both races,” said Robinson.

NEXT ARTICLE | The Munga leaderboard: Race village three at Loxton