But, despite a further complication that was operated on last week, she says she is more motivated than ever to do well next season.

The 31-year-old suffered her first bad injury, to her shoulder, in March this year after enjoying a highly successful Africa Continental Championships.

She was out of action for three to four months, but came back strongly to win gold in the team time-trial and silver in the individual time-trial at the African Games in Morocco in August.

Then bad luck struck again. She broke her clavicle (collar bone) and underwent surgery. However when she got back on the bike complications with the plate occurred and she had to be operated on again.

The year has thus been a mental, physical and emotional rollercoaster for her.

“This year started on a very positive note, with a good time-trial and road race result at SA champs. I was selected to participate at African Champs in March.

“Shortly afterwards I had an accident where I injured all the ligaments in my shoulder, which were still healing from a prior shoulder dislocation. This put me out of racing for a very long time.

“Personally I was devastated after a good start to the year. I got back on the trainer and then rode as soon as possible to try and keep my form without causing more damage.” 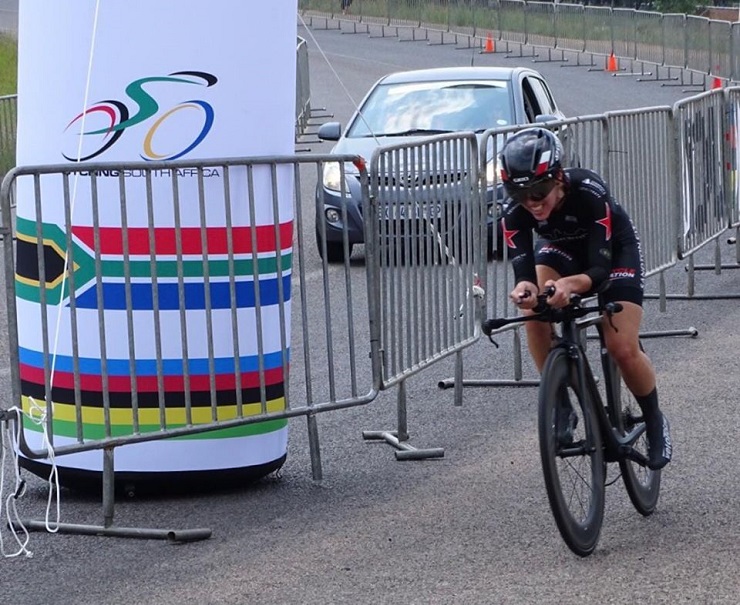 Zanri Rossouw came close to giving up the sport she loves this year. Photo: Zanri Rossouw/Facebook

While she recuperated she was also selected for the World Championships.

“African Games went so well and we won gold [Rossouw, Carla Oberholzer, Tiffany Keep and Maroesjka Matthee] in the team time-trial and a silver for me in the individual TT.

“Ashleigh Moolman Pasio came first in the TT and it was great to share such good results with her.”

The next day Rossouw was involved in a bad crash during the road race and badly fractured her left clavicle. It was the same shoulder as she had injured before.

“It took me a while to make sense of it all – what happened and what the implications would be. Coming from such a high, having good form . . . and then back to doing nothing.”

But she had much to be proud of, her two medals at the African Games representing a great personal achievement.

“It gave me confidence and created excitement for the future.”

Rossouw was operated on again last week Monday after complications occurred in her shoulder, with one of the screws starting to push through her skin.

“It is another setback. Mentally this is very tough.”

She said the rollercoaster ride she was on had been crazy and she was in a lot of pain for many months.

“Then you need to get yourself out of bed and motivated to get on a trainer at some point, to at least start moving your legs and just fight back overall to get back in shape.

“I also feel this made me so much stronger. I learnt there will always be curve balls in life, sometimes coming down faster than you can juggle, but your attitude and internal fight to get better play a big role.

“It taught me that a support system is very important and those people know who they are who stood by my side through all the ups and downs this year.”

Rossouw said after she broke her clavicle in Morocco, in her mind she was done with cycling.

“It took me two weeks to make a decision to not just leave everything and walk away.

“Now I am motivated. I might not sit still next year. All jokes aside, based on recovery and capabilities, goals and objectives will be set accordingly.”

Her goals for 2020 are to stay active, get back to racing and remember to enjoy it. She will also focus on getting better at doing time-trials.

“Don’t give up if things are not always working out as planned. It’s okay to feel down and some days less motivated than others.

“Let yourself go through the motions, but when you’ve done that start setting small goals and once you achieve them, set new ones.

“There must always be something to work towards, even if you can only sit on an indoor trainer for months. When you are almost recovered you will be happy for the work you have already put in, even though it didn’t feel important at the time.”