Gert Heyns achieved a podium position in his debut Wines2Whales, which he raced alongside Arno du Toit. The three-stage mountain bike event started in Somerset West and finished in Onrus, near Hermanus, at the weekend.

“I’m happy to finish second in my first attempt at Wines2Whales,” said Heyns.

“It’s been a long year for myself and Arno.

“Winning the Cape Pioneer Trek was our main goal for the second half of the year and after we managed to do that we decided to push through to end off the season with Wines2Whales. So we’re quite satisfied to walk away with a podium position.” 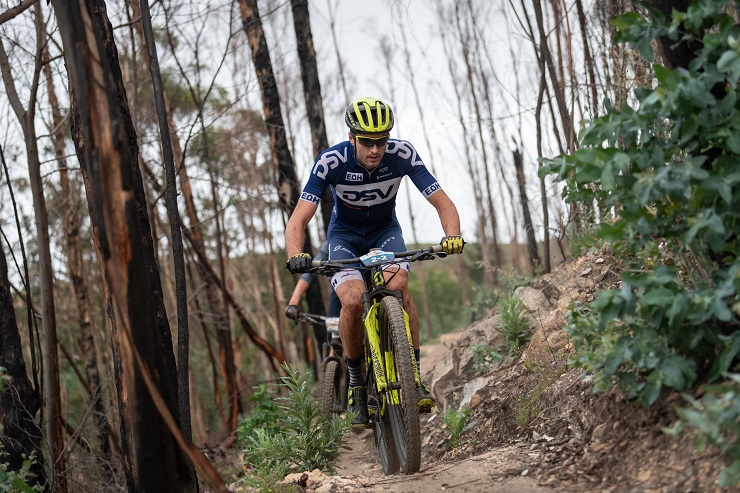 Gert Heyns (pictured) and Arno du Toit achieved a podium position in the Wines2Whales Shiraz, which finished in Onrus at the weekend. Photo: Xavier Briel

Heyns said on the first day they were a bit off the pace early on, but managed to catch up to the leading two teams just before the portage section.

“It came down to a three-team sprint where we finished third.”

On the second day Heyns and Du Toit, who finished second in the stage, saw Beers set a fast tempo for most of the race.

“About 15km from the finish the race blew apart and we finished a few minutes behind NAD and we also had a decent time gap on Pyga.

“We knew that to make up time on the last day would be very difficult.”

On the final day they managed to get away with team NAD early on, but could not maintain their pace.

“We got caught by Pyga, but managed to hold on to finish the stage in second place.”

Heyns said all three stages felt similar to him, but the first probably suited him best.

“It had more climbs than the other two.

“The second day, however, was the most challenging for me due to the high pace. The only challenge was trying to keep up.”

He added that the last 15km of the final stage to Onrus was a highlight for him.

“It offered fun trails and chasing Pyga to the finish made it even more exciting for us.”