Having started her off-season the week before the 947 Ride Joburg MTB race, Sarah Hill surprised herself with her ability to bounce back so quickly when she placed second in Johannesburg on Sunday.

Hill, 26, who also came second in the 70km Trailseeker race in Cullinan the previous day, said she went into the 55km event with no expectations about her performance.

“The freshness in my legs was exhilarating, but I had to keep in mind that my body needed to slow down before it could speed up again.

“I could definitely feel the ache in my legs from racing 70km the day before.”

She added that Robyn de Groot, who won both the aforementioned events, had given her some “amazing insights” into the value of rest and recovery.

“I really hope to learn from her and slowly follow in her footsteps.” 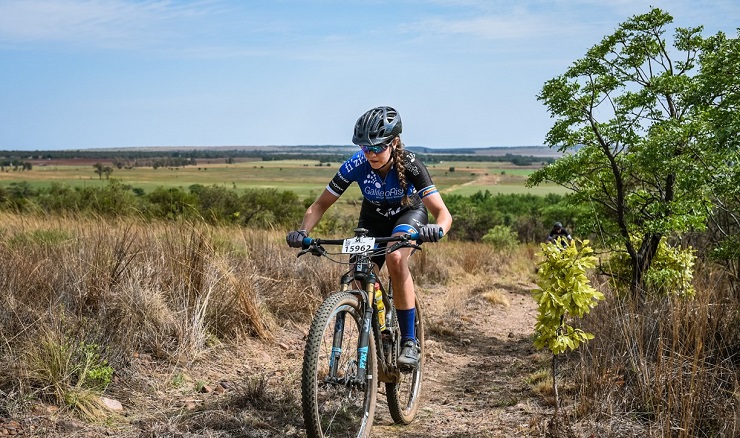 Sarah Hill surprised herself with her ability to bounce back so quickly when she placed second in the 947 Ride Joburg MTB race in Johannesburg on Sunday. Photo: Henk Neuhoff

Hill, who also came second in last year’s 947 MTB event, added that coming second to De Groot again after racing her the day before was somewhat expected.

“Her performance at the Trailseeker was inspiring to ride behind and I knew she would come into the 947 ready to defend her title.

“In the back of my mind I knew that the 947 suited me better than the Trailseeker, but starting with the men added a new excitement which was a challenge to tackle.

“The men start much faster than the women do, allowing the women’s group to shatter within minutes after the gun goes off. I tried my best to hold onto the pace like Robyn was able to do, but just like at World Champs early in the year she has a flying start that is untouchable right now.”

Hill said there were 80 of them in the start pen and the top women all positioned themselves in the first three rows.

“It really takes some guts for us to try to race with the excitement that the men bring. It’s quite overwhelming and different starting with so many fast guys.

“But I really do love it because it forces us to start harder and race outside of our comfort zones. When you do that you naturally push your boundaries, race faster, dig deeper and grow as an athlete.”

Soon after they started there was a climb they all sprinted up in a bid to get into the singletrack first.

“My sprint has always been good, but the guys made me feel like I was going backwards. Robyn is fantastic at weaving herself in and out of fast-moving groups, so trying to hold her wheel was nearly impossible.

“I watched her effortlessly sneak away and just decided to put my head down and give it my best shot.”

She ended up finishing seven minutes and 37 seconds behind De Groot, with her Galileo Risk teammate Theresa Ralph completing the podium.

Hill said last year, with De Groot suffering from a vascular problem, the race was a lot closer, and she, along with Ralph and De Groot broke away from the women’s group together.

“Results-wise it was exactly the same with Robyn winning, me coming second and Theresa third.

“This year, Robyn broke away from us two within minutes of the start.

“Performance-wise she has taken a world-class step and Theresa and I are eager to follow after our off-season.”

Hill felt these results, as well as her weekend’s performance, gave her a lot of confidence and belief in the power of rest.

“My coach has really made me focus on resting from the inside out and it’s showing in my confidence going into next year.

“With the South African calendar being so full, tackling hard efforts weekend after weekend can get quite taxing. Ensuring that you are rested mentally is an absolute game-changer.

“It takes a bit longer for the mind to settle than the body.”

She added that her closest supporter, Rory Button, often reminded her about the bigger picture, emphasising the process rather than the immediate result.

“It really takes a team, and I’m so grateful for the support I have received of late.”

With her MTB season over, she said she was not planning any training on the bike this week.

“Theresa and I will show up at the 947 road race on Sunday, but being the end of the season we again will have no expectations and will enjoy racing a local event.

“I’m still amazed by my 2019 season. I performed beyond my own expectations and I’ve learnt more than I could have imagined.

“With the support of the pro women around me I feel they have helped build me ‘up to standard’ and I’ll continue to pursue my dreams with their ongoing help.

“The pay-it-forward aspect in the women’s field right now is priceless. It’s such a great feeling being an SA mountain biker right now, and I can only see it getting better and better.”

Hill said her goals for 2020 were still in the making.

“Theresa and I will once again race together, and we want to change up the races slightly.

“We have so much to choose from in this country and we want to ensure that we’re still trying out new races whilst performing at the golden oldies.

“You can expect us at the Cape Epic, but beyond that our season is still under discussion. We’re very excited to step into 2020, so watch this space for details about our team and racing calendar.”