Andre Nelson won the Steak Race in a new record time of 2:23:20 when the testing event took place in Port Elizabeth at the weekend.

The 90km race, which started at Grass Roof, is considered the city’s toughest cycle event.

“To win the Steak Race is an achievement on its own, but to take the course record is more than I could have asked for,” said Nelson.

“It feels great and for me personally it was a huge victory.”

He added that he had no idea he would be able to achieve what he did, and going into the race as defending champion meant he had a big target on his back. 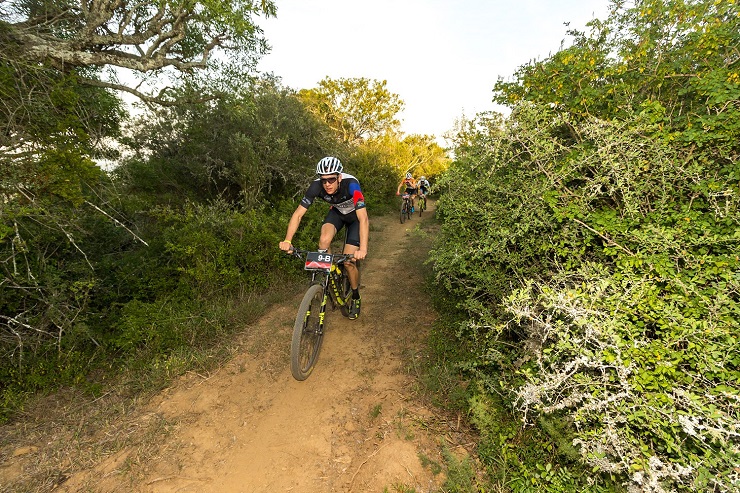 Andre Nelson won the Steak Race in a new record time in Port Elizabeth at the weekend. Photo: Shayne Minott

“I had a lot of work ahead of me. I just raced as aggressively and as tactically as I could. I, of course, wanted to win again, so that was the motivation.

“This was my third time participating and I’m privileged to say I have won consecutively.”

The 28-year-old said the race started quite fast and most of the top contenders sought to stay out in front to avoid trouble after a mass start.

“After the first 10 to 15km the breakaway of the day was established. There were seven of us as we headed to the first challenge.

“I was sitting quite comfortably in the lead group as we headed down ‘Three Sisters’ towards ‘The Wall’. Everyone was quite nervous at the foot of the climb and then I went to the front and put in an effort.”

Nelson said he managed to drop three members of the breakaway group.

“We made our way to the Van Stadens pass and towards the turn-around point. Coming back, Conrad Viljoen put in a big attack to drop one more breakaway member, which then left three of us – Ryno Gerber, Conrad and me.

“We rode out the pass and pressed on. When we got back to ‘Three Sisters’ I pushed myself again and managed to drop Conrad. Ryno and I continued to work together and we were fully committed to keeping and growing the gap we had created.

“During the last stretch Ryno started taking a bit of strain. I saw the opportunity and took it to the finish line. I’m super proud of the way he performed and gave it his all. I could not have asked for a better breakaway companion.”

A challenge for him was that he was not as prepared as he was last year coming into the race.

“I was on a three-week holiday and left my preparation for the race rather late. So I wasn’t feeling super confident, but I trusted in my abilities to overcome this.”

Nelson said he felt “super happy” with his season as he had also managed to win a few big races, including the Hayterdale Classic, JBay Wind Farm MTB Classic, Bay by Bike MTB Race and the individual time-trial at the East Cape Provincial Cycling Road Champs.

“I’m especially grateful for the support I have received from all the brands that back me.

“Next year I’ll target all the same races I did this year. It’s always nice going in as a defending champ,” said the Port Elizabeth local, who rides for Wayne Pheiffer Cycles.