Grant Daly has competed in the Longmore Classic for the past few years and finally claimed the title at Crossways Farm Village on Sunday.

“It feels great to finally take the win,” said the 22-year-old from Port Elizabeth.

Daly said the start of the 50km race was “pretty fast”, but he managed to jump on the front from the word go.

“Once we hit the first climb the bunch had been split up and we were a small group of about four or five.

“I just sat up front and kept the pace high and just before the top I upped it a bit and we hit the first section of singletrack where I rolled a big gear and opened a small gap to Reinhard Strumpfer.” 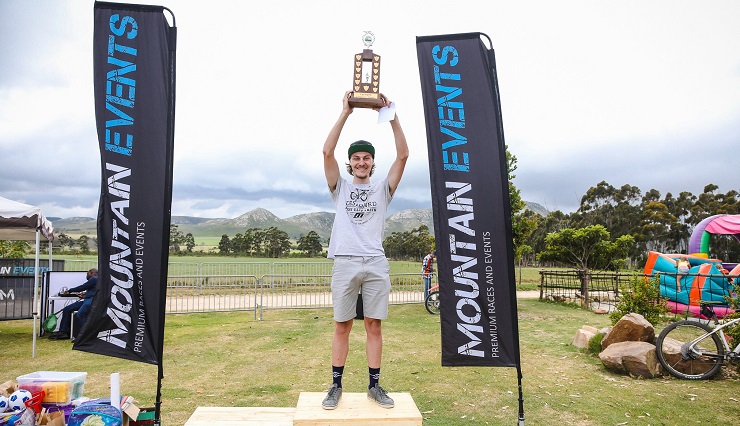 On the next gravel road Strumpfer was still in sight but Daly said he kept his calm and just turned the gear.

“I then got onto the gravel road drag to the King of the Mountains spot and could see Reinhard in the distance. Once at the top I stopped to refuel and Reinhard was no longer alone but had three others climbing with him.

“I kept a good pace for the rest of the race and on the next bit of undulating gravel road managed to keep the gap.

“I then hit the last long climb which took riders down some fast and fun singletrack. We were then taken along the railway line to the bottom singletrack, which was a pedalling section and kept things going the last 15km of the race.”

Daly said he found the route challenging but enjoyable.

“A lot of the climbs were drags and I was able to make good efforts on those climbs. My technical skills aren’t the best, but I was happy with the way I handled the descents.

“The steeper climbs were where I struggled, but I just put it in a gear and focused on the power I was putting out and kept it constant.”

Daly said Strumpfer was his biggest competition. Every time Daly opened a gap the latter would reel him in, but never quite get close enough to get on his wheel.

“Every time I hit an open section he was in sight.”

Daly said he had not been riding as much as he would have liked to the last few months and his victory brought about a realisation.

“It made me see that if I can train properly from now on I can be way better and push myself more in the bigger races and do better in the upcoming events.

“The season wasn’t that great for me and I was disappointed that I missed so many races throughout the year.

“It started off badly and I took a lot of time off. So the last few months have just been about getting on the bike and enjoying the ride, with a lot of coffee rides and racing to see how I’m feeling.

“I don’t have any crazy or exciting plans for next year yet but I’ll be doing the crit series in PE in the beginning of January and have entered the Attakwas, which I’m excited to do again.”