Having suffered a bout of bad luck in 2019, Liezel Jordaan is hoping to turn things around when she lines up for this year’s Stellenbosch Cycle Tour on Sunday.

The 24-year-old, who won the 97km race in 2017, struggled with malfunctioning gears last year, causing her to get stressed and lose focus. This led to her finishing a disappointing sixth.

“So I’ve decided to go into the race without expectations this year, other than to really race my heart out,” she said.

Jordaan, who won the time-trial and placed second in the road race at last weekend’s Western Cape Road Championships, said she had a good idea of where her form was currently.

“Especially following the Western Cape champs – I hope to have the same legs as last Sunday this coming race day.” 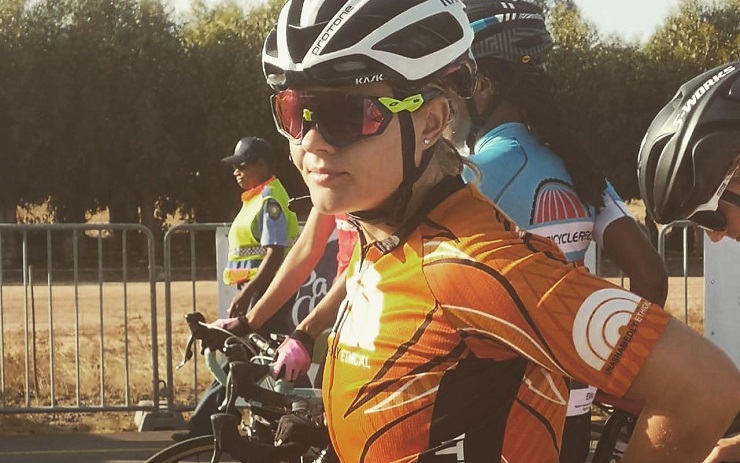 Liezel Jordaan, who finished sixth last year, is hoping to turn things around when she lines up for the Stellenbosch Cycle Tour on Sunday. Photo: Supplied

She was glad the old route had been reinstated, moving back this year from Val de Vie to Stellenbosch High School. The major climb of Helshoogte Pass, which challenged riders near the end last year, will now come shortly after the start.

“Personally, I really like the route. I never worry about a route profile too much, because everyone gets the same route and you have to take it as it comes.

“You still suffer, anyhow. Yes, it’s good to study it beforehand and know what to prepare for, but you shouldn’t get stuck on one section and overthink it too much.”

Some of the challenges for her, she said, were not exactly event related.

“It’s just to be able to push through moments of suffering. I normally overcome those by directing my thoughts elsewhere.

“Regarding strategies, I think when not racing in a team there are a lot less tactics. So I’ll probably just see who is on the start line and form a race strategy. If there are climbers I know that the climbs will probably be hard and adjust to that.”

Jordaan felt the best part of the event was the home stretch.

“Everyone is smelling the finish line and the speed picks up nicely. It’s just a rush that I don’t normally get with other events.

“It’s always such an exciting finish for me. I also love all the people and the vibe that comes with it. It’s one of the biggest races for the beginning of the season.

“I’m looking forward to it. It’s a nice race to do, especially before nationals,” said the current SA time-trial champ.

Looking ahead, Jordaan said she was excited about what was in store for her this season.

“I’ll be doing a lot of Western Cape races and might throw in a few mountain bike races as well, like the Trans Baviaans and 100 Milers.

“So far it’s been good to get back into racing, a feeling I really missed.

“My biggest goal is to stay on the bike and to not get injured. Other than that I’m aiming for a few podiums where I can.”