The route he set for himself was around the yard of his home in George, Western Cape.

The 24 hours started at noon on Saturday and finished at noon yesterday. He covered 255km in total.

“Since the lockdown started I have set out a short lap to ride around our house,” said the 32-year-old.

“The lap is 400m long, physical and very technical, so the going is slow.”

The PYGA Euro Steel rider said physically he felt great for much of the 24 hours except for one hand, which took a beating. This resulted in holding, pulling and lifting the bar becoming a challenge.

“Mentally it was much easier than I expected, but that’s because I was in the right mindset and kept myself busy with small challenges the whole time.

“The pain in my hand was the biggest issue for me. But I quickly realised that I can’t really do much about it and I’m just going to have to live with it. Once I realised that, it was much easier to deal with.

“At 5.30am I was drained from focusing that hard for that long. So I also just accepted it and decided that I’d need to take a 30-minute nap to better my chances for the last six hours.”

Beukes said he really enjoyed the section between 10pm and 2am. 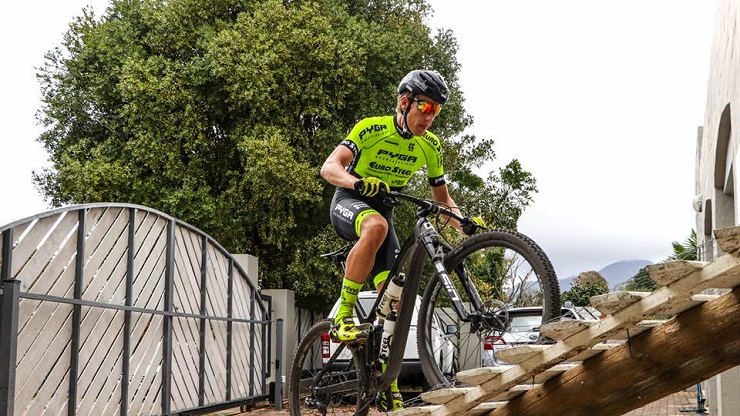 One of the obstacles Matthys Beukes had to tackle during his 24-hour mountain bike challenge. Photo: Deidre Cloete

“I did it in one go and was in a very good state of mind, so everything just flowed so nicely.”

He decided to take on this unique challenge during lockdown for two reasons.

“Firstly, I know it is a tough time for so many people right now with coronavirus taking a heavy toll on livelihoods and happiness. So I wanted to do something to let people know that you can do anything when you are in the right mindset.

“Yes it is tough and it gets depressing at times, but that’s okay. All that matters is how we deal with it and our attitude towards the mountains we face.

“And lastly, I need to challenge myself and do something that is outside of my comfort zone once in a while. This was the perfect opportunity to do that for me. I’ve done something that I was intimidated by and mentally that gave me confidence.”