Phil Liggett, the Voice of Cycling, has commentated on the world’s top races for the better part of five decades. We spoke to him while in lockdown in South Africa to find out which stories stand out. We’re bringing these to you in a series of articles titled Memories of the Peloton with Phil Liggett. 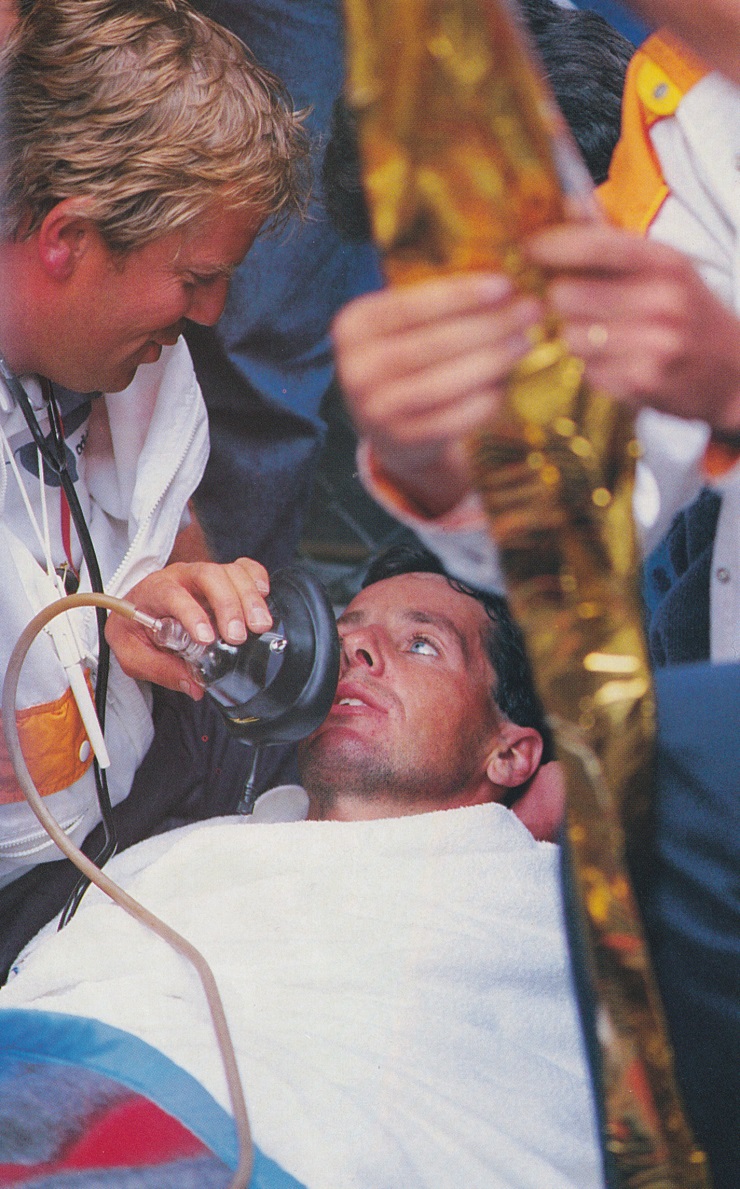 An oxygen mask was used to revive Stephen Roche when he collapsed on the finish line on stage 21 of the 1987 Tour de France. Photo credits/Anders

The 21st stage of the 1987 Tour de France is one of those that sticks in your mind permanently. It’s often played on social media channels and is obviously one that has impressed a lot of people.

We’ll start at the end of it. I was doing the commentary with Paul Sherwen and it was coming to the end of the stage, which was raced over 185km between Le Bourg-d’Oisans and La Plagne at the far end of the Alps on the other side of Briançon.

The climb to [the ski station at] La Plagne is a nasty one. Pedro Delgado had said the previous day that, if he was going to win the Tour, he would need to be two minutes clear of Stephen Roche before the individual time-trial in Dijon on the penultimate day of the race.

He had taken the maillot jaune off Roche’s shoulders on Alpe d’Huez the previous day and was 25 seconds to the good.

This route was one of his real chances and Roche knew it, so he led a daring escape midway through the stage in the hope of building an advantage over Delgado before the final climb started. Delgado, who was riding for the Dutch PDM team, was forced to chase and eventually reeled Roche in along the valley between the Col de la Madeleine and La Plagne.

They were marking each other on the approach to the climb and so it was the Frenchman, Laurent Fignon, who rode for Système U in those days, who attacked and got away.

He was out of the hunt for the overall but determined for a high finish – and he had good form. Anselmo Fuerte, from Spain’s BH team, was the only one to react to his attack and they started the climb of La Plagne together.

Meanwhile, we had heard that Delgado got away from Roche and was piling on the pressure. I say “heard” because we never saw any pictures. This was the great sadness.

French television had just taken on a new director, I was told at the time, and of course he was French and Fignon was a big name in France and the cameras stayed locked on Fignon and Fuerte all the way up the climb.

Race radio was saying that Roche was on the climb now and losing approaching two minutes on Delgado. This was the action. The race to win the Tour was behind the two leading riders on the road.

We weren’t seeing any pictures – it was frustrating. Fignon was continuing to attack Fuerte, who had finished second on Alpe d’Huez the day before, and eventually outsprinted him at the finish.

Fabio Parra, the great Colombian climber, was stuck in-between with nobody worrying about him on this occasion. Delgado, as far as we knew, was probably now winning the Tour de France.

He was at least two minutes ahead, we thought, as to our knowledge Roche, who had deposed Roberto Vicentini from the leadership off the Italian Carrera outfit at the Giro, had been cracking all the way up the climb.

We were looking at the pictures and the cars were coming in behind Parra. Half a minute went by and Delgado came into the picture. Behind him were some cars and then two little legs appeared at the top of our very small monitor.

Paul pointed at the legs. I looked and I just yelled, “It’s Roche. It’s Stephen Roche”, which I could not believe myself, but it had to be his legs.

He, somehow, made the recovery of a lifetime and finished the stage just four seconds behind Delgado. The result of that, of course, was that Delgado knew he had lost the Tour.

He was never going to maintain his small advantage over Roche, who was now 39 seconds behind following a 10-second penalty for illegally feeding from the team car. He simply couldn’t ride a time-trial that well.

I remember Roche collapsing in front of me and I quickly went down from my commentary position. I looked at him: he had an oxygen mask on, his eyes were opaque and he couldn’t speak.

And then they put him on a stretcher, put him straight in the ambulance and he was gone. So he avoided all the protocol of the day as well as the press interviews.

The next morning, I saw him coming to the start line and I said, “Stephen, are you okay?” And he goes, “Oh yes, Phil, I’m fine”.

He said, “Look, I was hurting and I was tired, but it wasn’t as bad as it looked”. He said, “I just wanted no press interviews, no talk. I just needed to get out of there”.

And that is what he told me. He milked the situation a little bit so that he could optimise his recovery. By the way, Stephen was known for his brilliant overnight recoveries, which is why he was a great stage-race rider.

At the time-trial, Delgado was in the start house, wearing the maillot jaune. The rain started as Pedro started. And I said, “Even the skies are weeping for Delgado”. Because there was no way now that he could win the Tour.

Roche’s overall victory margin was a mere 40 seconds, by two seconds the second smallest in history at the time. But he had really won the race on La Plagne, which became my favourite stage in the 47 Tours that I had commentated on.

As an aside, I got to really like Pedro. He is a great guy, great competitor and, by the way, he loves South Africa. He kept coming to me and Paul, asking information on safaris. “Where should we go?” He loved South Africa.

So we made good friends with Pedro and no one was happier than me when he won his Tour de France in 1988.

Read the first and third articles in the series.