South African professional cyclist Willie Smit says the 1 000km Zwift Challenge he took on from midnight on Tuesday was a spur-of-the-moment decision. 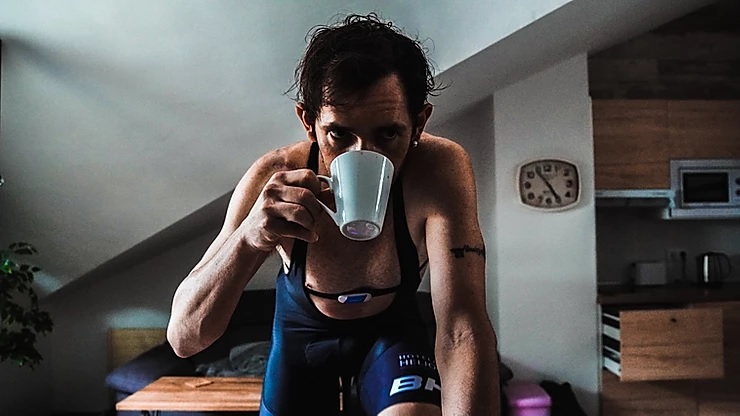 The 27-year-old did the challenge from his home in Soldeu, a small village located up in the Pyrenean principality of Andorra.

“I was finishing off my training for the day after watching the Ali-Foreman title fight when the idea sprang to mind,” stated Smit in his blog post.

“I had already done something similar late last year, completing a 500km ride in SA. That was out on the open road though and in the company of others.

“The sixteen or so hours it took to complete that adventure redefined what I had envisioned as possible. Why not double the distance, I thought, as I climbed off my bike. And so the #1000kmZwiftChallenge was born.”

“I might be a professional cyclist but I’m certainly not an ultra-endurance athlete. There was so much of the unknown to contend with, not to mention the black dog of self-doubt.

“Would I suffer stomach ailments? What if the internet connection gave out? Can an indoor trainer actually run for that long?

“All of these and many other questions constantly flew through my head like wildfire. Then there was the matter of cause. I had made it known that I wanted to use the challenge as a vehicle to raise funds for Cycling SA.

“Having come up through the ranks back in SA, I wanted to give back to the sport in some way. But what would the reaction to this be, I thought. Would people see this as authentic and genuine?”

He said it all started when he enlisted several friends to join in the challenge. Mornay van Heerden, HB Kruger and NTT Pro Cycling’s Jay Thomson all joined in for segments of the day-and-a-half trek.

“But it was Pieter Seyffert who was with me each and every pedal stroke of the way. Pieter was quite literally a world away, pedalling away at his home in SA. Not that we ever felt truly isolated.

“Social distancing is one thing, but contact with others is everything. And thanks to the ways of modern technology we stayed in voice contact for most of the time.”

Smit said they had made it known that they would not exactly be taking a leisurely spin. Simply put, he and Seyffert would ride at a pace fast enough to be challenging, although not so hard as to inflict permanent physical damage.

“We also wanted to include a fair amount of vertical gain, which we capped at approximately 8 100m. An easier route would therefore have seen a much faster total time.

“Then there was the small matter of altitude. With me being at close to 2 000m above sea level, maintaining cadence and power output would be a factor to contend with.

“And while extra calories would also need to be consumed, cadence actually ended up being one of the more challenging and influential aspects of the journey. Bigger gears mean more muscle damage whilst lower ratios meant more pain from saddle sores.

“Also, an indoor trainer means there is no respite – a rider is ‘constantly on the pedals’ so to speak. Even getting out of the saddle becomes a problem, the fixed aero road bike setup putting strain on all the bodily joints.”

By 770km, he and Seyffert were completely spent and this was where one of the hallmarks of ultra-endurance sports came to fore.

“It is a given that you and your partner will experience some rough patches, either collectively or individually. And you have to be able to manage that as a pair. Yes, a good human connection and rapport really is essential.

“So we got off at around 4am for an hour’s nap. Needless to say that the benefits of this pause were incredible – from barely being able to turn the pedals we began to fly again, the final 230km passing by almost effortlessly.”

He said it had been a few days since they completed the challenge and he was in a reflective mood.

“Thinking back, the journey seems both blurry and crystal clear. Things like each and every coffee consumed after 500km having no effect at all, or my duct-taping my shoe to a broken pedal along the way; these are just a couple of things that are highlighted in the memory bank.

“What really stands out, though, is the sheer number of SA riders who joined us for parts of the challenge. And they set a fast tempo too, putting Pieter and myself on the limit at least a few times.”

Where to from here? Smit says quite a bit of rest and recovery is planned.

“The Covid-19 pandemic means that we don’t really have any clarity as to exactly when racing will resume. That said, if the professional cycling season ends up being cancelled I would like to attempt a 2 000km ride in less than 70 hours.

“That is the idea for now and if it sounds a little crazy, that is because it is. These kinds of challenges change a person’s perspective in ways that I’m not sure how to describe.”