Grant Lottering aims to establish a South African record for the highest elevation gain in a non-stop 24-hour ride, which will take place on the brutal Swartberg Pass on October 30. 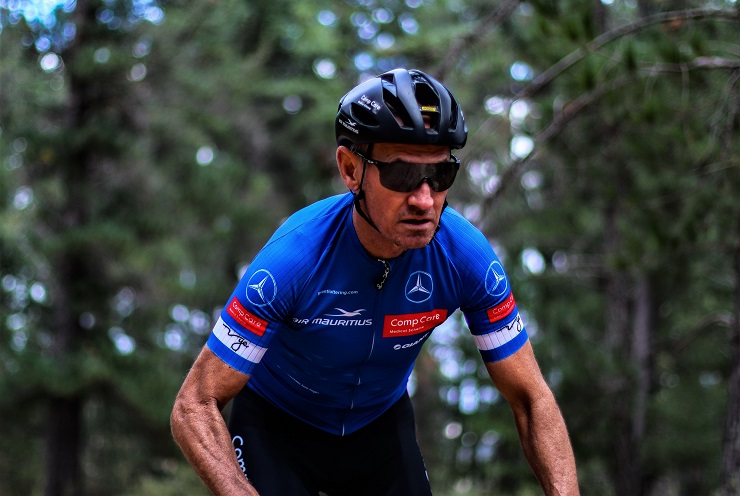 Ultra-endurance cyclist and cancer survivor Grant Lottering will tackle a non-stop 24-hour ride on the Swartberg Pass to raise funds for the Reach For A Dream foundation. Photo: Max Sullivan

“I don’t think there’s a record like that in South Africa as I haven’t been able to find anything. No one has ever tried to do it as a fundraiser either.

“It will be brilliant if I can do it. It will also tie in with my message of overcoming 2020 and encouraging people to not give up.”

The 52-year-old said he first had the idea to take on a 24-hour challenge two years ago and chose Alpe d’Huez in France, the 13km alpine climb made famous by the Tour de France.

To get to the summit at 1 810m, he had to tackle 21 hairpin bends at an average gradient of eight per cent.

“It proved very popular on social media, but unfortunately I had to stop after five times up and down due to severe mountain storms and lightning after dark.

“I wanted to go back this year, but international travel is just too uncertain and by the end of September and October it’s snowing in the Alps.”

Therefore, the ultra-endurance rider decided to rather tackle an extreme 24-hour attempt on the “local” mountain, from the Prince Albert side.

“With the full support of my sponsors I approached the Reach For A Dream foundation with the idea and they were delighted to be a beneficiary.

“I want to help fulfil the dreams of terminally ill children via corporate donations through a fundraiser on social media every time I summit the climb,” said the Laureus Sport for Good ambassador.

Lottering, a cancer survivor, added that this challenge would therefore be twofold.

“It will consist of me reaching the summit as many times as possible and attempting to establish an SA record.”

He said the 12km Swartberg climb, which tops out at an elevation of 1 583m, was very demanding. The first 4.8km from the Eerste Water river crossing averages over 11 per cent on rough gravel.

“That will be the toughest part as the onset of fatigue will make the descending back down treacherous, especially at night. There are a number of sheer drop-offs and hairpin bends to content with.

“The other factor will of course be the weather. Heat and wind will play a role – there’s no doubt about that.”

The attempt will be his last big training ride in preparation for his second local Im’possible Tour, which will take place from November 24 to 29.

“The Swartberg challenge will provide the perfect 24-hour training to enable me to climb with maximum efficiency, suppleness and strength, which I will need come end November.”

His first local Im’possible Tour ended after 66 hours at Val de Vie Estate in the Paarl-Franschhoek Valley in May last year.

“It was more brutal, extreme and beautiful than I expected.”

Lottering, who is also a motivational speaker, said everyone needed to overcome the year in some way or another.

“Life is unpredictable and I believe when a storm hits it is quite often to get us to where we’re supposed to be in our lives.”

He believed that many would reflect at this period and say it was the best thing that could have happened to them, but that it was a choice.

“Since my second life started in 2013, I have had to overcome 11 surgeries, cancer and numerous other setbacks,” said Lottering, who survived a life-threatening crash in Trento, Italy, seven years ago.

“Yet I managed to complete Im’possible Tours I would never have believed would be possible.”