Five-time national downhill mountain bike champion Johann Potgieter would have been racing in Europe right now, but that had to be put on hold due to international travel restrictions. 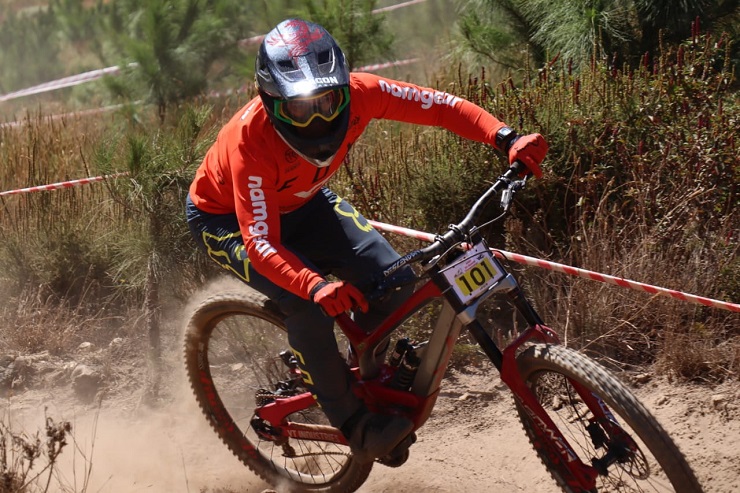 Five-time national downhill mountain bike champion Johann Potgieter has been forced to readjust his goals and plans due to the international travelling ban. Photo: Max Sullivan

The 33-year-old, who races for Team Racing Dudes in Germany, planned to compete in IXS Downhill Cup races with the goal of qualifying for World Cup events.

“As international travel is not allowed, I really have no idea what my first event back will be,” he told In the Bunch yesterday.

“I know they’ve rescheduled the World Cup dates, but the first measure for me when our borders open up will be to see where I am at that point and where the season is standing.”

Potgieter, who placed second in the first race of this year’s Western Cape Downhill Cup series, said that even if it was possible to go to Europe later this year, he might not even race.

“We’ll have to see what happens, but as it stands now it looks like I’ll be doing more local events this season.”

He added that, besides the fact that he might not be racing abroad this year, his goals were pretty much still the same.

“I have my coffee bar in Port Elizabeth which I’m very proud of. It’s a big passion of mine and I’m about to open one in Cape Town, so one of my bigger goals this year would be to start that up successfully.”

Potgieter said he had actually enjoyed being home during lockdown as he had been travelling a lot in the early part of the year.

“To spend some ‘forced’ time at home was much needed.

“I was on the indoor bike a lot and did circuit and body training. Luckily downhill is more high intensity and long hours in the saddle is not on our training schedules that often.

“I also took out my jump bike and practised some of my old-school tricks in front of my house on the driveway, which was a lot of fun.

“So I would say my current form isn’t too bad, but I’ll definitely not be up to full race pace.”

Business wise he had been unable to present skills clinics or youth camps, so he structured his work online.

“I’ve started a Patreon account where I post videos of tricks of the trade, helpful tips, how to approach specific obstacles and how to change your mindset to do certain skills easier.

He said his biggest challenge was having much less income but being at home gave him the chance to think outside of the box.

“It gave me time to see how I can restructure what I’m doing or even think of something new that I can do if the opportunity arises.

“Thinking of new ideas and watching inspirational or racing videos online also kept the motivation up.”

Potgieter said looking ahead he would definitely still be racing and always try to do as well as he could, even though some of his goals had to be adjusted.

“It will now be a lot more online stuff like videos in which I share my experience and give advice.”

In the longer term, he wanted to build his skills clinics and youth camps. Although it had been growing rapidly, the amount of time he spent travelling made it hard to structure everything well.

“I’d love to look back in 25 years and see a pro rider or world champion and be able to say that I played a part in getting that person to where he or she is today.”