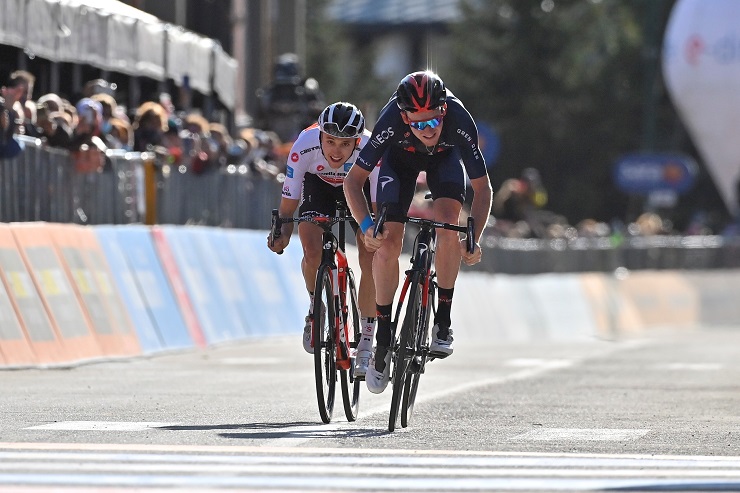 Britain’s Tao Geoghegan Hart took his very first maglia rosa and with it the overall victory in the Giro d’Italia when he bested his closest rival, Australia’s Jai Hindley, in the 15.7km individual time-trial in Milan today.

Having started the final stage level on time with Hindley (Sunweb) after winning yesterday’s mountain stage at Sestriere, it came down to a head-to-head battle against the two and it was Geoghegan Hart who was able to rose to the occasion.

The 25-year-old from Ineos, who started the tour as a back-up rider to Geraint Thomas, placed 13th on the stage in 18:14 to beat his rival by 39 seconds in the overall standings.

Wilco Kelderman (Sunweb), who had lost the pink jersey to his teammate the previous day, finished third overall, 1:29 behind.

The stage victory went to Geoghegan Hart’s teammate Filippo Ganna, who set a time of 17:16 to beat Victor Campenaerts by 32 seconds and Rohan Dennis by the same margin.

“All of my career I had dreamt of being top five or top 10, maybe, in a race of this stature, so this is something completely and utterly different to that and I think it is going to take a long time to sink in,” said Geoghegan Hart.

“I only really knew that we must be in a really good situation when the DS told me not to take any risks in the last kilometre.

“It is not often that your DS tells you to slow down that much in a 15km time-trial, but I also knew the work was done at that point. So it was incredible to arrive here in the centre of Milan.

He said he wasn’t sure whether this would be the start of bigger things for him.

“I don’t know and I don’t really care. I’m just going to enjoy this – it is incredible.

“I’m going to stay as professional as I believe I have always been and dedicated and wake up every day looking forward to riding my bike, loving my life and being grateful for the honour and the privilege that I’m in to be on this team and ride these beautiful races.”

There was some consolation for Hindley, who won the best young rider competition.