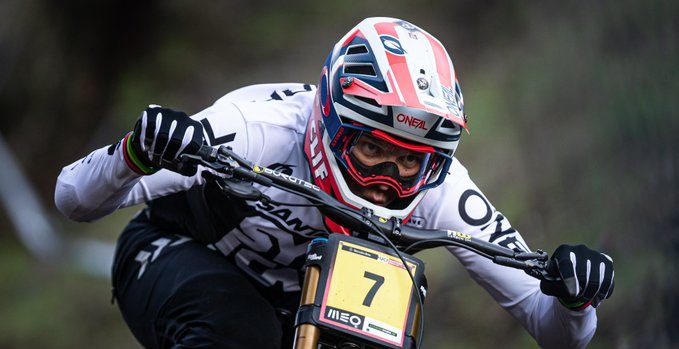 With the victory, the Santa Cruz Syndicate rider, who will turn 39 in November, became the oldest rider to win a World Cup race in the history of the sport – improving on his own record.

Minnaar was the fourth last rider to leave the start ramp and enjoyed a clean run to set the benchmark time of 3:55:239. Britain’s Matt Walker finished second, 1.833 seconds down, after losing time in the final two sectors.

France’s Loic Bruni completed the podium, 1.960 seconds off the pace.

“It hasn’t really sunk in much,” Minnaar told journalists afterwards.

“I had a great ride down and you know it is one of those bittersweet wins when one of your biggest rivals who is also your teammate and your good friend and, you know, he is leading the World Cup and then he punctures on the way down. I feel real sorry for Loris [Vergier] to have that happen today.

“I can’t believe it, you know, I’m speechless, really.”

“I had a good timed session and then, in qualifying, I was back a bit. Today I just tried to focus on neatening up my run and line and I knew in the mid-section that I was lacking time and once I got down to the bottom I thought I’m not going to lose the race here and went as hard as I can.”

Vergier qualified fastest but suffered a puncture on his run to finish way down the field. The Frenchman won the first two rounds of the series in Maribor, Slovenia, in mid-October.

It was Minnaar’s 22nd World Cup victory, which places him at the top of the pile in the sport. He placed fifth and ninth respectively in the first two rounds.

Walker (517 points) now heads the World Cup standings ahead of Vergier (503) with Minnaar (427) and Bruni tied on points in third and fourth respectively.