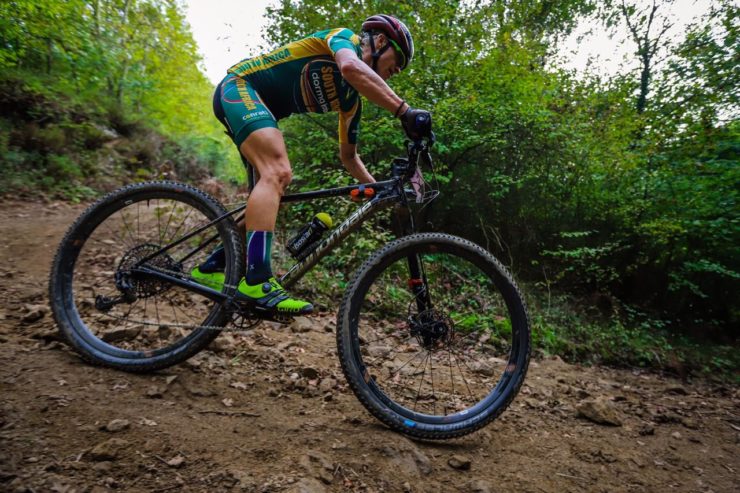 The 37-year-old dormakaba rider completed the 80.9km course in 3:44:09, less than two minutes behind winner Ramona Forchini of Switzerland.

Given the limited preparation she had for her first international event of the year, De Groot had targeted a finish in the top five.

While happy at achieving her goal, she said it was tinged with disappointment because as an elite athlete “you always dream of bigger things”.

“I think it’s important to have those dreams of achieving higher to keep yourself motivated, so, for sure, there is a bit of disappointment at the final result,” said De Groot, a bronze medallist at last year’s world championships.

“But if I really analyse the situation and the decision to head to Turkey to race, the preparation time was short for what you need at the Worlds, so in that sense I’m happy with fourth place. There wasn’t a big time gap to the first three.”

The build-up to Sunday’s race was testing as rain in Turkey had made the course fairly muddy.

“The practice conditions were quite different because the clay surface was still wet and it was pretty hard to keep momentum,” she said.

“The clay was clinging to the bike and tyres and you could barely roll.

“Fortunately later in the week the sun came out, so the course actually ended up being perfect for the race.”

De Groot said the field set a fast pace from the outset as they went through the opening 11km before the first climb at the start of a 30km loop, which they did twice.

“There was a lot of shuffling around and I stayed near the back to keep safe because there were a few crashes and technicals, which was quite surprising. But I guess anything can happen when there is that eagerness to race.”

On the first climb, De Groot stayed with a group of six riders who broke away as they tackled the ascent at a high pace.

“In fact, all the climbing was done at a high tempo and I just gave everything I could to hang in there.

“I could feel my legs were taking strain and at one stage Ariane Luthi [who finished third] and I lost contact with the front four, which we battled to close.

“Eventually we passed Blaza Pintarec [of Slovenia] and we worked well together, motivating each other as we tried to close the gap.”

However, they were unable to catch the front three until Luthi, who was 20 seconds ahead of De Groot, went past Ukraine’s Yana Belomoina.

“I saw her look back and she could see me coming, so she attacked and kept going, which meant the chase continued,” said De Groot, who also overtook Belomoina.

“I did my best to catch Ariane coming into the finish, but she rode really strongly and I didn’t have the legs to close the gap.”