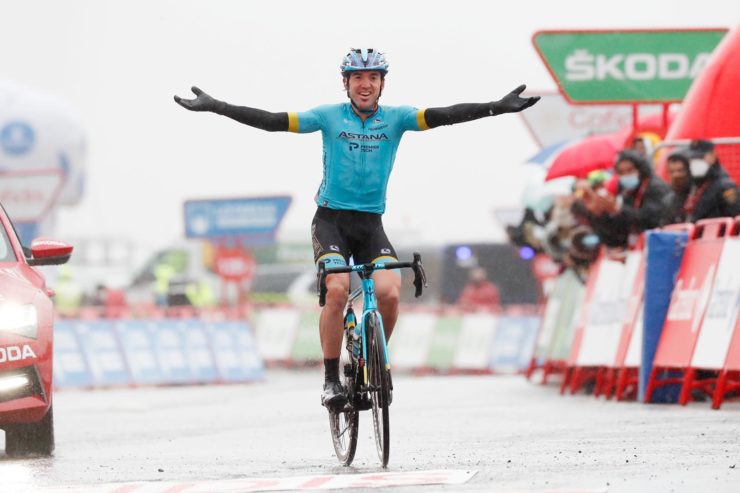 Spain’s Ion Izagirre broke away on the final climb to win the 146.4km sixth stage of the Vuelta a Espana from Biescas to Aramon Formigal today.

In cold and wet conditions, the Astana Pro rider created a gap with three kilometres to go and nobody was able to challenge him as he finished in 3:41:00.

He was followed across the line by Michael Woods (EF Pro Cycling) and former world champion Rui Costa (Emirates), who crossed the line together, 25 seconds off the pace.

There was a change in the general classification after overall leader Primoz Roglic struggled to put his rain jacket on at the top of the second last climb and lost touch with the leaders.

Although he was able to chase back on with the help of his team, the effort took its toll and he was defenseless when the attacks started on the finishing ascent.

Dan Martin (Israel Start-Up Nation) dropped to third, 20 seconds down, while Roglic slid to fourth, a further 10 seconds back.

Today’s result gave Izagirre a stage win on each Grand Tour, which he described as a “fantastic feeling”.

“Tomorrow is a rest day so we [he and his brother Gorka] decided to go for it,” he said of their strategy today.

“It was an advantage to work with my brother in the breakaway and in the end we were able to deliver the victory, so Gorka was always there for me.”

He added that he knew it was make or break when he made his final move with 3km remaining.

“I could see there was uncertainty among a lot of the riders and I just decided to give it my all to the finish,” said Izagirre.

Willie Smit (Burgos-BH) was the leading South African on the day, finishing 10:54 behind the Spaniard in 74th.