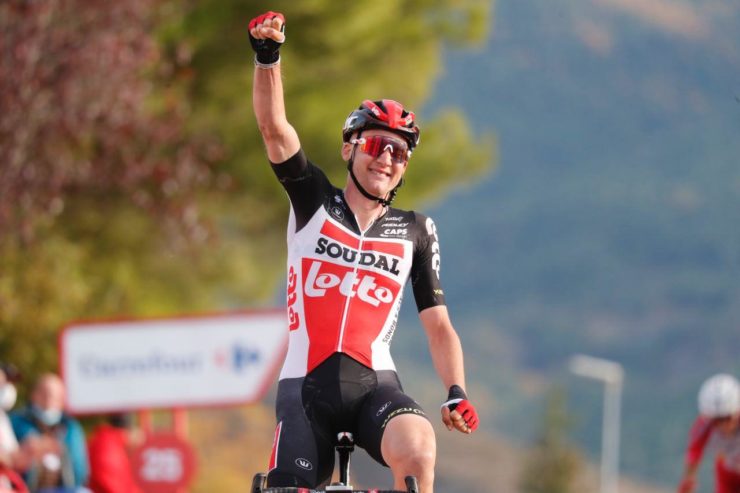 Tim Wellens takes the victory and king of the mountain jersey on stage five of the Vuelta a Espana. Photo: Photogomez Sport

Tim Wellens outdragged Guillaume Martin on the steep finishing ramp to win the 182.5km fifth stage of the Vuelta a Espana between Huesca and Sabinango today.

The Belgian was able to get on the French climber’s wheel when the latter launched the sprint from a three-rider breakaway and he was easily able to come over him on the 500m climb, which topped out at a 13 per cent gradient.

It was Wellens’ first stage victory in the Vuelta and his escapade also netted him the climbers’ jersey, which he took off the shoulders of Richard Carapaz (Ineos).

The three leaders, which included Thymen Arensman (Sunweb), enjoyed a three-minute lead over the peloton at the top of the final categorised climb – the second category Alto de Petralba – and they only had to negotiate 17km downhill and the short ascent to the finish to fight it out for the day’s honours.

Arensman, a former runner-up in the Tour de l’Avenir, was the first to chance his arm when he attacked around a bend under the one kilometre to go flag. The other two were however equal to the challenge and quickly pulled him back and then ditched him in the final push for the line.

“I was not so confident. All three of us are about the same level so I didn’t feel the strongest, but with the first attack I was surprised Guillaume Martin was a little bit behind and then I went for it on the finish line.”

The trio were part of an initial breakaway group of 12 riders. Wellens and Arensman were the first to go off the front of that group with Martin following suit a while later.

The Frenchman, 11th overall in the recent Tour de France, had his work cut out to reel in the two leaders, but eventually did so on the third to last climb with around 65km to go.

The dangerous American climber Sepp Kuss (Jumbo-Visma), 44 seconds behind overall leader and teammate Primoz Roglic at the start of the stage, also infiltrated the 12-rider breakaway. This forced the GC contenders behind – and specifically Ineos – to ride at a high tempo to neutralise any possible danger he might pose down the line.

Dan Martin (Israel Start-Up Nation), who was four seconds behind Roglic in the overall standings, crashed on the final ascent but within the final three kilometres and received the same time as the rest of the peloton.