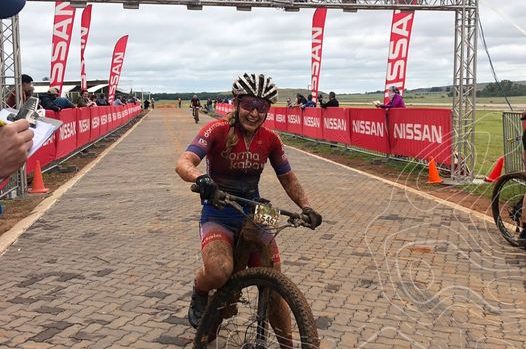 Amy McDougall received a big confidence boost for the sani2c mountain bike race when she capped a consistent Trailseeker Series by winning the Legends MX race in Pretoria on Saturday.

McDougall (dormakaba) will join forces with Robyn de Groot in the KwaZulu-Natal stage race, which starts on Thursday.

It was the 31-year-old’s first win in the Trailseeker Series this year after finishing second at Buffelsdrift, Van Gaalen and Cullinan and third at Sondela.

In muddy conditions, she crossed the line in 3:12:04, almost eight minutes ahead of De Groot, with Sarah Hill in third.

McDougall felt the win was reward for the work she has put in over the last few months.

“This win means a lot because I’ve made a big effort to be at all the races but haven’t managed to take a win before this one,” she said.

“Although the conditions played a big role in my success, I have been working really hard with my coach and we are finally seeing some good form. It is really cool to end the Trailseeker season on a high.”

She added they would take that confidence into the sani2c.

“It is inspiring to know both Robyn and I are going into sani2c strong, but we are very aware that muddy conditions will play a big role and preparation and riding smart are important.

“For our team, sani2c, for sure, is a big goal, especially in such a shortened season. It is the only team stage race, so we are excited to give it our all.”

“A bunch of about eight of us were together for the first 26km, until we headed into the Rosemary Hill single-track,” she said.

“It was so muddy and sticky there that our bikes completely clogged up. It was there that I got my gap on the rest of the girls.

“When I realised I was alone, I pushed through the single-track without stopping. Once I was out, I found a stick and cleared most mud off my tyres and frame.

“I put the stick in my pocket and shoved it in between my frame and tyres, front and rear, every few minutes to clear the mud while moving.

“I think this helped a lot to get my momentum going as soon as possible.

“I knew I had a pretty big gap, but I also knew how quickly that could change. So I put my head down and rode as hard as I could for the last 40km, focusing on good lines and staying upright.”