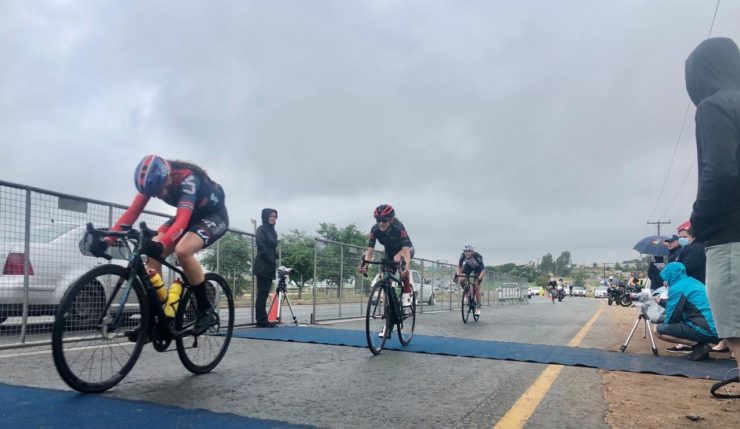 Sarah Hill used the Joburg Classic to test her sprinting prowess and ticked all the boxes as she outduelled Joanna van de Winkel to claim her first road race title.

The Galileo Risk Infiniti rider completed the 113km feature event in 3:16:27, holding off Van de Winkel (Cycle Nation) and Melissa Kretzinger in the dash for the line.

The 27-year-old Hill is more at home on the mountain bike, but was excited to achieve so well in her road race debut.

She pointed to some recent mountain bike events which had helped to whip her into shape.

“Racing the SA XCO champs in Stellenbosch two weekends ago gave me some great sprint work exposure, which helped when I needed to open up the taps,” said Hill.

“When you combine that with the long, hard efforts I put in to win the three-day Sabie Xperience stage race, I felt my form was slowly starting to come right.

“I’ve been working hard to reach my best form for my final event of the year – sani2c – and it has been great.”

Hill said she targeted a fast-paced race like the Joburg Classic to help with her sani2c training.

“I wanted to hang in there with the group because I knew, if I had an opportunity to sprint, it would be exciting to see where it took me,” she added.

“It’s not often I race out of discipline, so mixing things up this year has been a blast.

“Coming in ahead of a woman of such a high calibre has given me more confidence going forward.

“It was a pleasure being surrounded by all those girls and maybe we’ll see some of them in more mountain bike races one day.”

After a fairly easy start, Hill said the route became “quite punchy” as they entered the Cradle of Humankind.

“That’s where the girls started making quite a few attacks and it broke up the big group quite soon after the start.

“After that section, one of the biggest factors was the wind and for about 50km we fought head and crosswinds. By that time there were only six of us rotating, so it was quite difficult.”

On their return to the Cradle, Van de Winkel attacked strongly and Hill said she and Kretzinger had to work to close the gap before the final 3km climb to the finish. They were joined by Azulde Britz.

“The four of us rode through to the finish at a much easier pace because, all being from different teams, there were none of the usual team tactics.

“It was going pretty slowly for a while because I guess nobody wanted to make a move too early, so eventually I sat on the front and pulled them along a bit.

“With about one-and-a-half kilometres to go, Melissa jumped to the front and I sat on her wheel until right near the end when I was able to come around her in the sprint to the finish, with Joanna just behind me.”