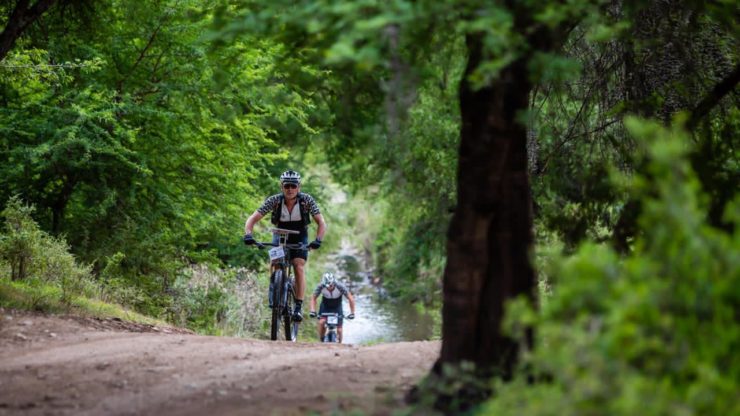 Pieter van der Westhuizen (front) and Henry Angove crossed the line together to set a new record time in the Freedom Challenge: Race to Willowmore on Sunday. Photo: Reblex photography

Long-standing friends and training partners Henry Angove and Pieter van der Westhuizen pooled their resources to finish the Freedom Challenge: Race to Willowmore in a new record time on Sunday.

Angove, 52, said they were extremely satisfied at achieving their goal in their first attempt at the self-navigated mountain bike race, which started in Cradock in the Eastern Cape.

“We set out with the aim of completing the distance in under three days and we felt that the record would be on if we could do that. In the end it was reasonably comfortable and I must say we had fantastic conditions on day three.”

He and Van der Westhuizen, 50, have done many endurance races together, hence crossing the line at Willowmore in unison.

“Pieter is an avid adventure rider and we love doing the Freedom Challenge endurance events,” explained Angove. “We have twice done the Race to Rhodes and I have also done the full Race Across South Africa.

“Our relationship works well because we train together, ride together, and, when the going gets tough, we both suffer in silence!”

Angove said the Freedom Challenge races were designed to challenge you mentally and physically.

“We do a lot of riding all-year round, so we are probably pretty fit. Each race is different, but this was a relatively longish ride, so mentally you have to be up to speed.

“For example, on the first day at about 6pm, we encountered some proper headwinds of around 30km/h. There was one stretch which was 24km long straight into the wind, so that is tough when you feel like you are going backwards.

“And then, on day two, going through the Osseberg in Baviaanskloof, it rose to around 37 degrees in the valleys.

“It’s essential, therefore, that you have the necessary fitness, but also the mental strength to stick to your plan and to work through any adversity you encounter.”