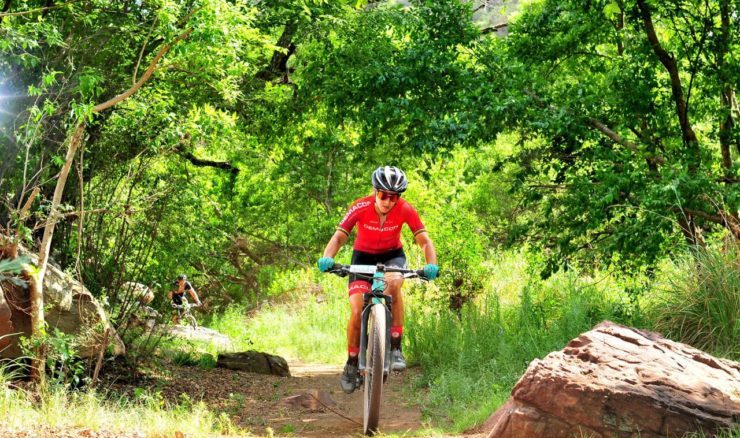 Demacon’s Kim le Court plans to switch her focus to mountain biking as she targets qualification for the 2024 Olympics in Paris. Photo: Trailseeker Series

Kim le Court has set her sights on the 2024 Olympic Games after a promising return to mountain biking in recent weeks.

The 24-year-old Mauritian, who races for Demacon in South Africa, has been among the pacesetters on the South African road scene for several seasons, with 2018 arguably one of her finest.

Apart from winning the Cape Town Cycle Tour that year, she also collected titles in one-day classics such as Cycle4Cansa, the 100 Cycle Challenge, Tour Durban and Emperors Palace.

She raced regularly on the mountain bike in the 2015 season, but victories on the road (including the Amashova Durban Classic) the following year directed her focus in a different direction.

Even though she only dabbled in the off-road discipline since then, she proved that she had the perfect engine for the grind of mountain biking when she won the marathon title at the African Games last year.

In 2020, she opened her account with a victory at the Ride for Sight road classic before returning to her home country two days after the Cape Town Cycle Tour in March to race her nationals and the African Continental Road Championships. However, the event was cancelled because of the pandemic.

“Then I got stuck there in lockdown for five months, which I spent training really hard on my indoor road bike.

“When I came back [to South Africa], I decided to jump on my mountain bike and have some fun because the whole situation really got to me.”

Le Court then realised that most of the events on the calendar were mountain bike races and decided to enter them.

“And that saw me fall in love with my mountain bike again,” she said.

That has led to a decision to switch her focus to the off-road discipline, although she will not be calling it quits on the road.

“It’s just that my attention will be a bit more on mountain bike racing from now on,” said Le Court.

“I am racing sani2c [in December] so I am putting my focus on mountain biking for now, with the ultimate aim of qualifying for the cross-country event at the 2024 Olympics in Paris.”

She has recently competed in the Trailseeker Series, finishing second in the Sondela race in mid-October and fifth in Cullinan this past weekend.

Le Court said she preferred mountain bike racing because of the nature of the racing.

“In mountain biking there aren’t any of the tactics you come across on the road or bigger teams where you sometimes have six riders against two.

“I have found that, in mountain biking, if you are strong and train hard you will do well.

“On the road it isn’t always the best and strongest riders who win, because it’s all about positioning and tactics, and sometimes luck, that go into crossing the line first.

“And this year made me realise that I don’t want to race anymore relying on a whole team for a win. I want to race my bike as hard as I can and win races because I am in good form.”