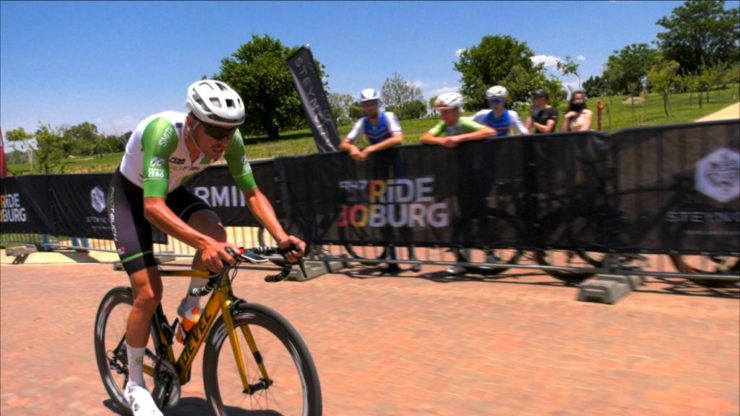 Cycle4Cansa champion Gustav Basson was delighted to pick up another win as his team secured a one-two finish in the Ride Joburg Criterium at Steyn City on Sunday.

The 24-year-old from Middelburg in Gauteng beat ProTouch teammate Kent Main in the race that was contested over one hour and one lap on a 1.4km circuit. Myles van Musschenbroek (PayFlex) placed third.

Carla Oberholzer, who turned out as a guest rider for Demacon, outsprinted Candice Lill to win the women’s event. Kim le Court completed the podium.

Basson, Main and Van Musschenbroek were part of a group of 10 riders who broke away early in the men’s race and the eventual winner paid tribute to his colleague for the work he did to deliver the title.

“Nobody in that group wanted to roll through or ride with us, so we had to take the initiative to ensure we didn’t lose out as well,” he said.

“Kent sacrificed himself to close the gaps on all the guys who wanted to attack and he kept the speed up so that we could stay away until the finish.

“Thanks to the furious pace he set, the field thinned out and it came down to four guys (including Team Enza’s Joshua van Wyk, who crashed out with four laps remaining) towards the end.

“One of the ways of thanking your team for their efforts is to make sure you win the race, so it was great to repay them that way.

“Kent did some phenomenal work during the race and crossing [the line in] second was great for him and the team.”

Oberholzer, who lives in Clarens in the Free State, said she was contracted to Bizkaia Durango until the end of 2020, but was being allowed to guest ride for Demacon.

The former national champion, along with teammate Kim le Court and Lill, opened a gap on the field within the first five minutes.

“We worked well together until the last five minutes when Kim did a lot of work for me after we decided that I would sprint today,” said the 33-year-old, who, although better known as a climber, has won the Ride Joburg road race in a similar fashion in the past.

“Candice went hard on the entire last lap and I could wait quite late before opening up my sprint.”

Oberholzer said their strategy was to race hard and to split the field as soon and as much as possible.

“Because Kim had her wisdom tooth removed this week, we didn’t want to rely on her sprint alone. So making the race hard to get rid of the other sprinters was our plan A.

“I’m obviously super happy with the win. With the past year being as tumultuous as it has been we are grateful for any opportunity to race.

“It was great teaming up with my old teammate again and the easy way we worked today after not racing together for a year made the win so much sweeter.”