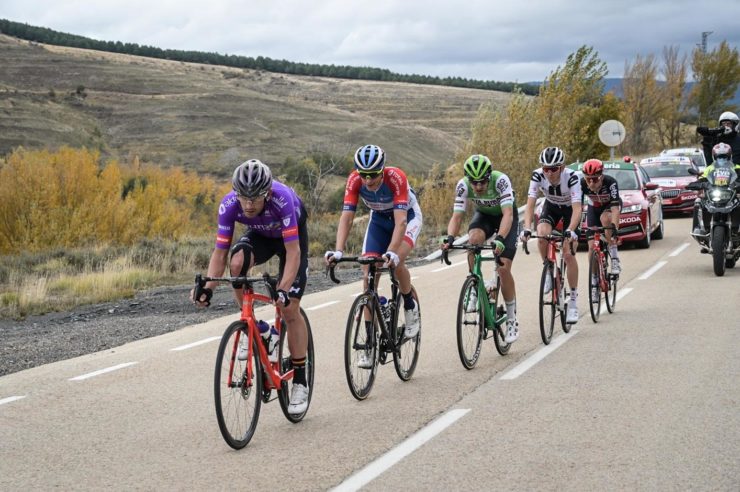 South Africa’s Willie Smit (leading the peloton) was satisfied with his performance at the recent Vuelta a Espana – his second Grand Tour. Photo: Charly López

Despite several tough challenges, South Africa’s Willie Smit is pleased to have done a job for his team at the recent Vuelta a Espana.

In what was his second Grand Tour, the 27-year-old Burgos BH rider finished 73rd in the general classification after ending 118th in his debut tour in 2019.

The fact that the Spanish race started so late due to Covid-19 and that it was one of the hilliest Grand Tours that Smit can remember, made it a demanding three weeks on the bike.

“Getting to the Vuelta so late meant it was important that you didn’t fall ill and then you also had to contend with the weather at this time of the year,” he said.

“We did get quite lucky with the weather, but it was still pretty cold on some days and I remember doing one of the final climbs completely kitted out with my rain gear and going fast – and I was still freezing.

“Luckily, not every day was like that,” said the affable rouleur, who racked up multiple victories in South Africa’s toughest stage races – most notably the Jock, Lowveld and Mpumalanga tours – before packing his bags for Europe.

With stages regularly featuring more than 3 000m of ascent, the former African continental champion said this year’s tour was an especially tough assignment.

“It’s really hard and you can’t afford to have any bad days, so you have to pay attention to your body to make sure you are in the best possible shape.

“Otherwise your tour is over.”

Having achieved his first objective of gaining selection, Smit said he wanted to finish well while doing a job for his team.

“Those are the sorts of things you are trying to achieve, which I was able to do by being in the main breakaway on two consecutive days in the first week.

“The main job of getting into the breakaways is difficult and complicated and, once you get there, you want stay as long as possible.

“Unless the peloton gets it wrong, it’s difficult for the breakaways to stay away, but I felt I was up there with the best and not getting dropped every day, so that was positive.”

Although he is one of the country’s most talented riders, Smit said there were always little things one could pick up.

“You learn to get a bit smarter in terms of handling your bike, when to jump over to different groups and in making those tactical decisions.

“On the rainy days you learn how to take corners at faster speeds and how to handle your bike better in the rain, because it can be quite scary taking corners at 80km when you literally can’t see if there’s any danger on the road.

“Also, you learn about your body and what food it can tolerate and what it can’t, which is critical to surviving three weeks in the saddle.”

Having the strength to go into one more breakaway as the peloton entered the finishing circuit in Madrid on the last day, was proof that Smit did exactly that.