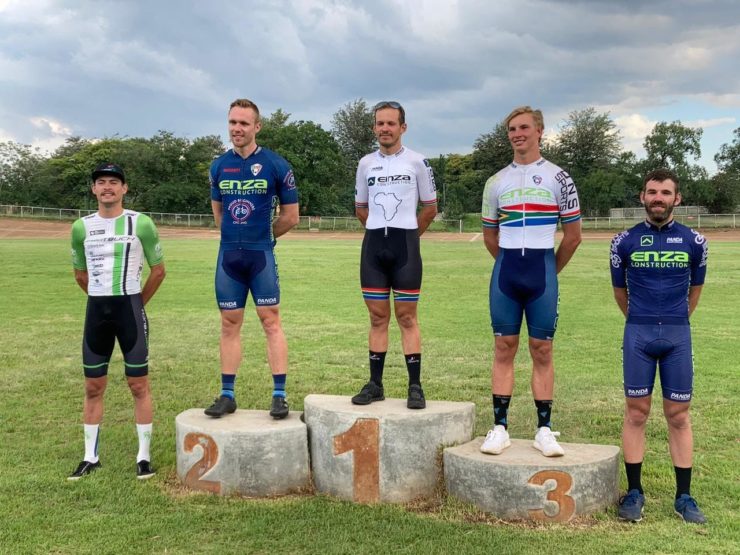 David Maree capped a memorable weekend when he successfully defended his Joburg Omnium title on Sunday after winning the Satellite Classic in Magaliesburg on Saturday.

The Enza rider, though, said he had plenty of moments of self-doubt before finally edging his teammate, Joshua van Wyk, for the title. National junior omnium champion Kyle Swanepoel, also from Team Enza, placed third.

He said this run had set him up nicely as he strives for selection for the SA squad for the Olympic Games in Tokyo in July and August.

“Hopefully it bodes well for the Olympics because everything has gone according to plan so far. Getting to Tokyo is my big goal, so my training is geared for that at this stage.”

But even top riders experience nerves and the 31-year-old professional said winning the Satellite was a double-edged sword.

“That win gave me a bit of a boost, but knowing how hard Saturday’s race was, I was concerned that my legs would cave a little bit on Sunday,” he said.

“There was a lot of expectation as the defending champ, so there were some worries going into the event.”

His objective was to ride tactically and “to save where I can and spend my pennies wisely”.

“The aim was not to concede too many points in any of the events and I was able to place third in the scratch, win the tempo race and finish second in the elimination,” said Maree.

“So everything went to plan and I started the points race two points behind Josh and two ahead of Kyle, so it was very close between the three of us.”

He added there were some tense moments ahead of the points race but that everything fell in place as soon as the final event started.

“It’s actually amazing, because you have all these worried thoughts but, the minute the racing starts, you forget about that stress and focus on what you do naturally.

“In the points race I didn’t score in the first two sprints, which was quite a concern as Josh had scored, but then the race turned and I managed to pick up a few points.

“We also had to keep an eye on Gustav Basson, who started quite far behind us but managed to take a lap and move up the standings.

“We all know how strong he is, but after that lap I could see he wasn’t feeling so lekker anymore.

“People who are not used to track racing don’t understand the effort you have to put in because there is no time to recover.

“I started scoring points as I came into my own and I could see the other riders slowing down as fatigue set in.

“A lot of that is due to gear selection because most of the guys were riding bigger and heavier gears than me. I think that made a difference because my gear ratio allowed me to perform at the same level throughout the entire event.

“Still, it did come down to the last sprint in the points event where, if Josh beat me and I didn’t score, he would win overall. But I managed to get third place and Josh was fourth, so that gave me the win.”

After two days of intense racing, Maree said he was exhausted at the end.

“I had to sit down for a minute or two after the points race to collect myself because the heat was extreme. But it was extremely satisfying to defend the title.”