This year the only Ironman on the African continent is celebrating its tenth anniversary. 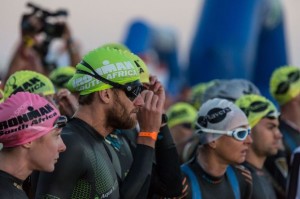 At its very core, for many Ironman starts off as a goal, a reason to complete something. Athletes come from all over South Africa and the world each with a personal motivation as to why they’re attempting the absurd.

Once the finish line has been crossed both athlete and spectator turn their thoughts from absurd to incredible and this is often where the seed is planted and why they come back.

This year a select group of 25 athletes will compete at Ironman South Africa for the tenth time, having been on the starting line at Hobie Beach from the very beginning and every year since.

After ten years the event has grown to see record numbers and for the first time, selling out.

Another first is the change to course which now sees the swim become a single loop of 3.8km and the bike leg become two loops of 90km each.

For the veteran athletes who have done this race multiple times this poses a fresh new challenge and for the first timers presents an opportunity to be one of the first to take on the unknown.

With these changes, the event in essence now moves into a new era with a new look, new feel but with the same history and traditions.

At this, the tenth anniversary edition of Ironman South Africa, athletes and spectators can expect something a little different as the race is as much a celebration of the event as it is the athletes.

In nine years we have witnessed some incredible scenes from Raynard Tissink winning his first Ironman South Africa title and Chrissie Wellington shattering the world record to father-son duo Kevin and Nicholas Garwood finishing the race together for the first time.