It is with tremendous sadness that we bid farewell to Legend of the Pedal Basil Cohen, who passed away in the early hours of Wednesday morning, after a lengthy battle with illness. 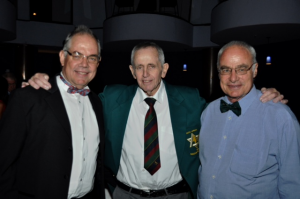 Basil was, as many of us are aware, an extremely capable cyclist, representing South Africa at the Maccabi Games, and was, as the major shareholder in Deale & Huth, the founder of the cycle trade as we know it today; being the importer/wholesaler/retailer, at that time, of virtually all of the foremost brands in world.

He was also recognised as the very first development officer of cycling into the black community, through his enormous efforts with the mines in particular.

His commentaries at Hector Norris Park and at the SA Track Championships for many years were nothing short of legendary. He was in fact very possibly the greatest SA cycling commentator of all time and was certainly able to turn track cycle racing into a modern day gladiator encounter. His exceptional commentary created such a competive and show business atmosphere, which in turn spurred the riders on to their very best performances.

We shall dearly miss Basil, who was indeed one of the most staunchly supportive of this movement, Legends of the Pedal, and who never ever missed a single related LotP function or activity; which was perfectly in keeping with his unfailingly upbeat, always giving and forever supportive character.

Basil will be most sorely and dearly missed by all and we wish him only tailwinds and downhills, to wherever his new travels take him.