National cross-country champion Rourke Croeser will return to South African shores to defend his title at the Stihl SA MTB Championships in Stellenbosch on Saturday. 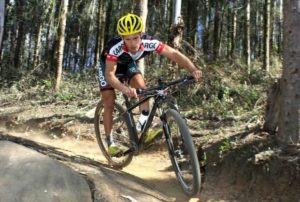 Croeser, who has been racing in Europe this season, will also be out to earn vital UCI points in his bid to qualify for next year’s Rio Olympic Games.

“SA Champs is crucial if I want to qualify for the Olympics,” said the Full Dynamix/USN rider.

“I have put a lot of energy into the World Cup season this year and I have been performing well over there so I am confident that I can take that form into nationals.

“I have been the best South African performer at the World Cups but now I have to prove that I am the best in South Africa,” said Croeser.

His task will be made that little bit more difficult by the fact that he has never raced on the Stellenbosch course before and only has a day or two to acclimatise.

“There is always pressure when you have to defend a national title and I know that the local guys have been in some incredible form of late.

“Getting back into the country quite late is going to make the preparation harder but I am looking forward to a great race.”