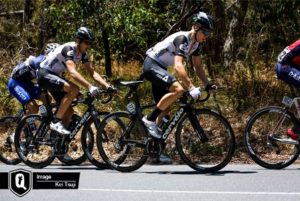 DiData’s Cameron Meyer, Salvatore Pucchio (Sky) and Rafael Valls (Lotto-Soudal) opened a gap of around 20 seconds with 25 kilometers to go.

Kennaugh (Sky) bridged with Haas and teammate Reinhardt Janse van Rensburg trying to stay on his wheel. However, the Brit proved too strong and managed to ride off the front to win along the Geelong Waterfront.