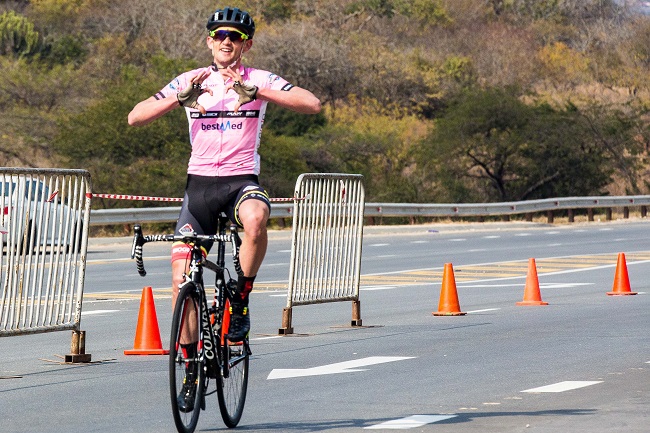 The 23-year-old RoadCover rider, from Nelspruit, trailed the yellow jersey by seven seconds going into the final day when he finished in second place to Team NAD’s Bell in the second stage yesterday.

With team-mate Mornay van Heerden playing a key role, Smit was able to overtake Bell on the steep ascent of Hilltop not far from the finish and stayed in front until the end, winning the stage in 3:55:36 and, with it, the overall title in 8:44:15.

Champion in the nine-day joBerg2c mountain bike race in April, Bell took the stage’s second place in 3:56:06 and the same position overall in 8:44:38.

After winning the opening time-trial on Friday, ProTouch’s JC Nel, from Honeydew in Johannesburg, finished third today in 3:56:59, but ended fourth overall, with Van Heerden completing the top three in the general classification in 8:46:35.

Smit’s victory in what is considered South Africa’s toughest road stage race came after spending two months in recovery mode following a crash in France in April when he broke a collarbone and injured shoulder muscles and ligaments.

He said his main objective today was to conserve as much energy for the final climb, about five kilometres from the finish.

“I knew what I could do on the last section so I just had to keep some power for the last bit up Hilltop,” said Smit.

“Mornay was the last line for me on the climb and he made sure it was really hard before I took the lead.

“I managed to make 10 to 15 seconds on the climb and was able to maintain that gap to the finish.”

Besides having spent most of the past few months in rehabilitation, Smit has also had tummy problems, but said the pace at the start of today’s stage had played into their hands.

“The start was fairly easy so it wasn’t too tough on my stomach,” said Smit. “It wasn’t that hot so I didn’t get too dehydrated.”

“My tummy problem is a chronic condition and it comes and goes. It comes from stress, but there is always pressure so it’s something I just have to try to manage.”

He said a lot of hard work had gone into winning the Jock Tour, which is presented by Rudy Project, for the second time.

“You have to work for it and you deserve it at the end of the day. But there’s a bit of luck involved as well.

“I’m riding with a great group of guys and that motivates me and makes it all worth it.”